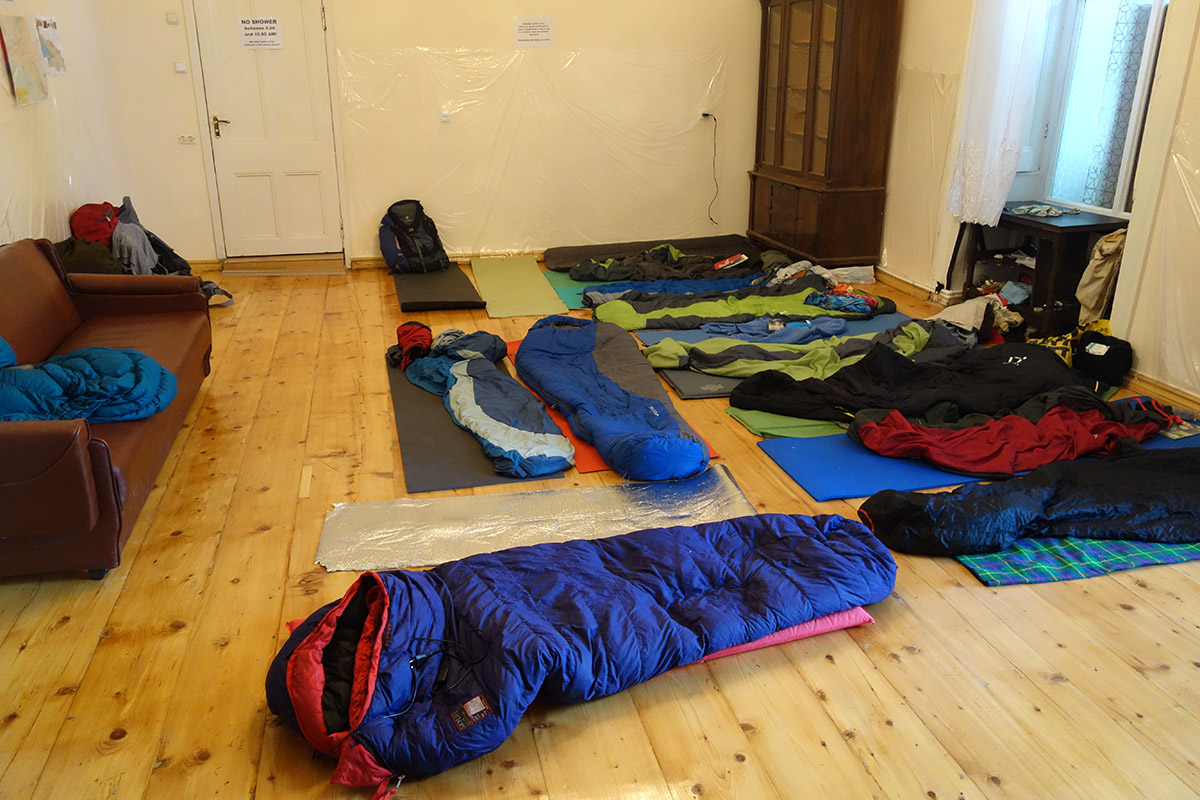 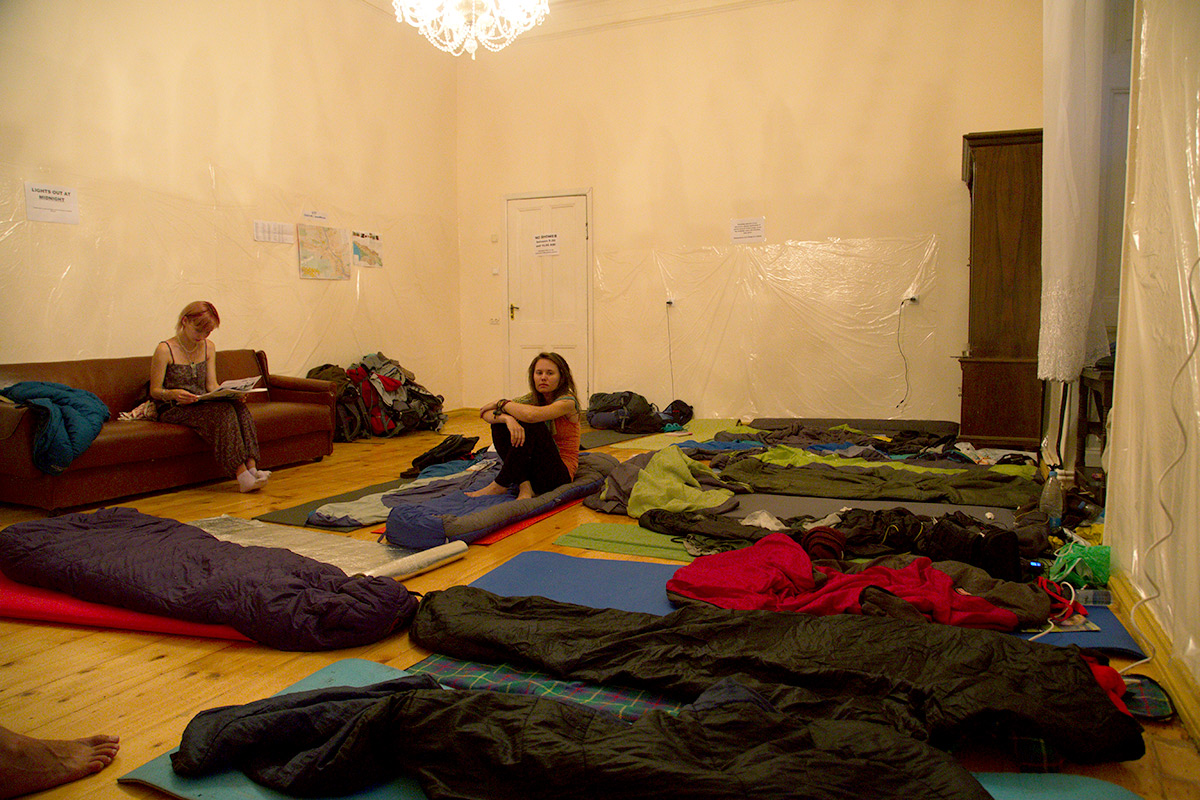 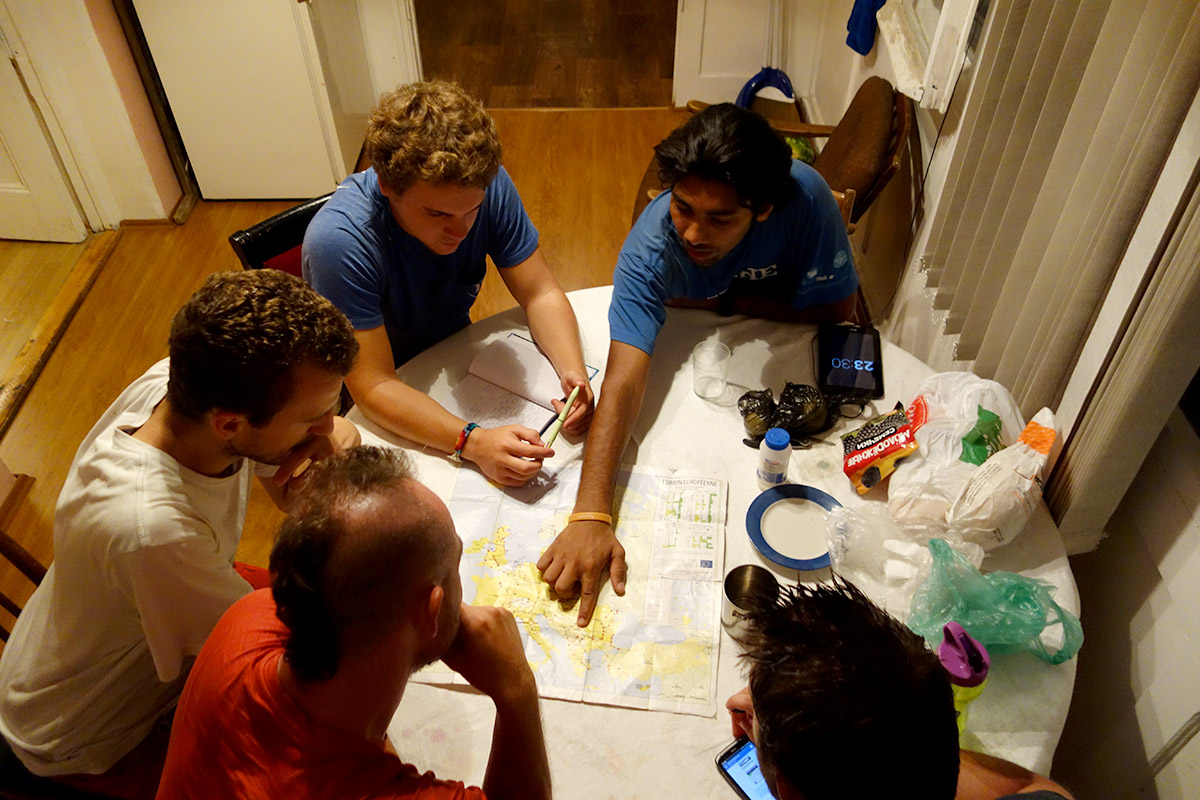 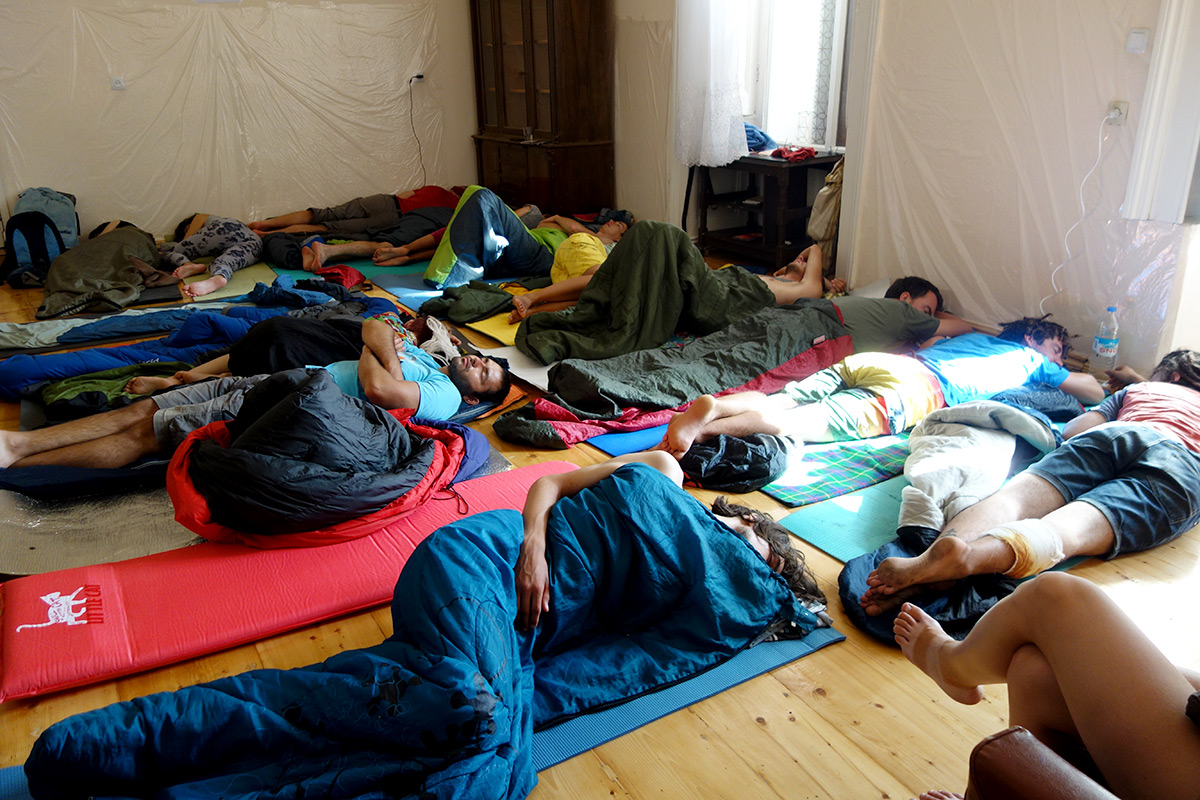 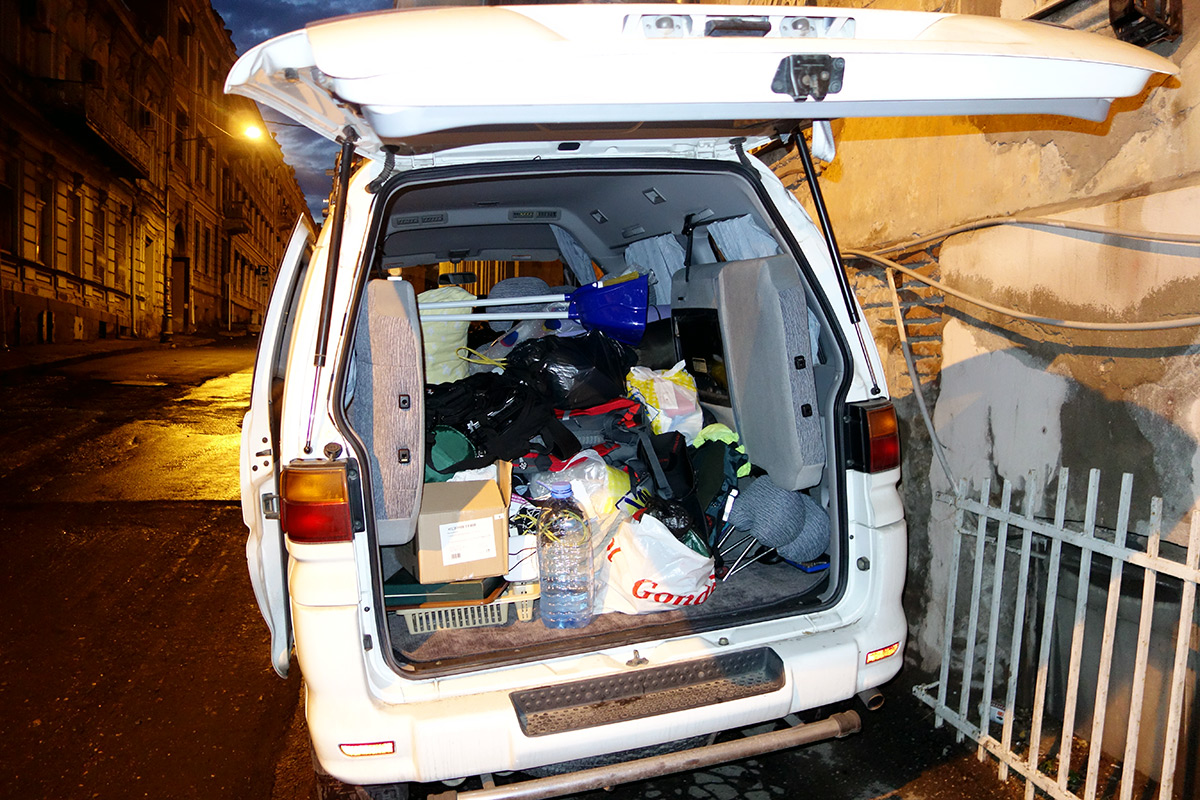 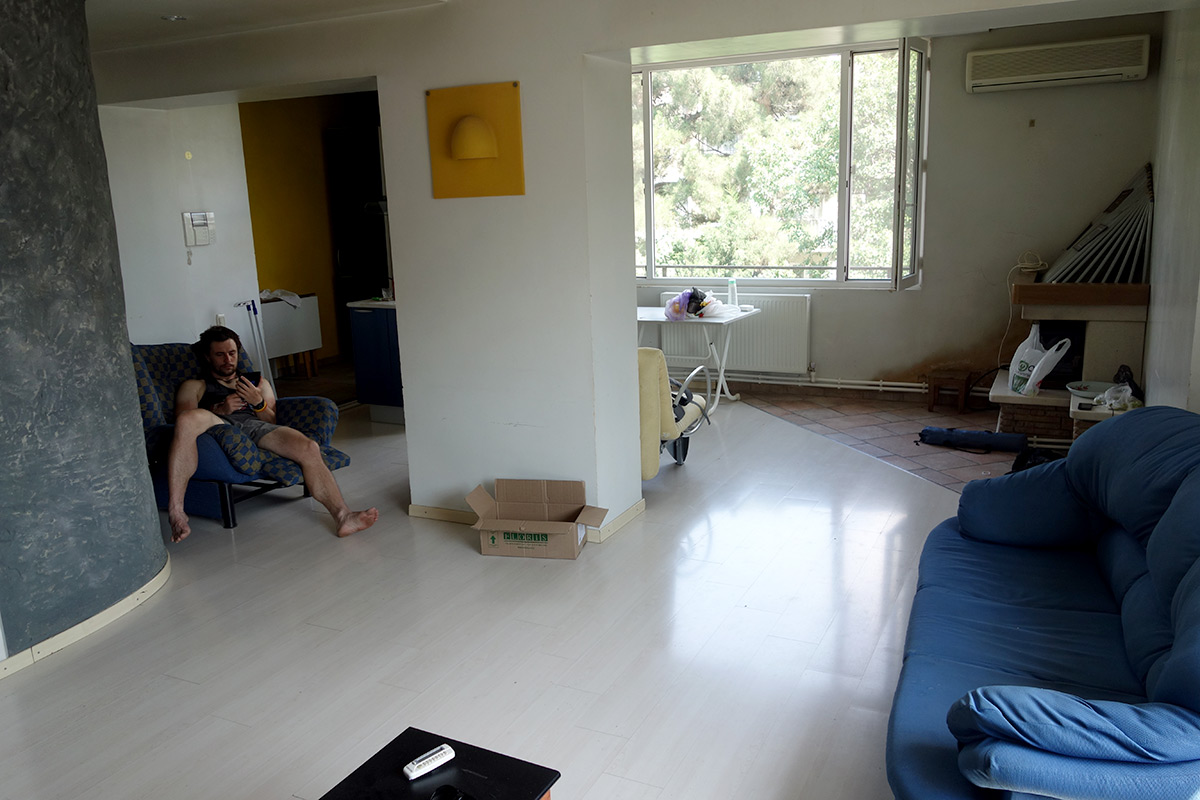 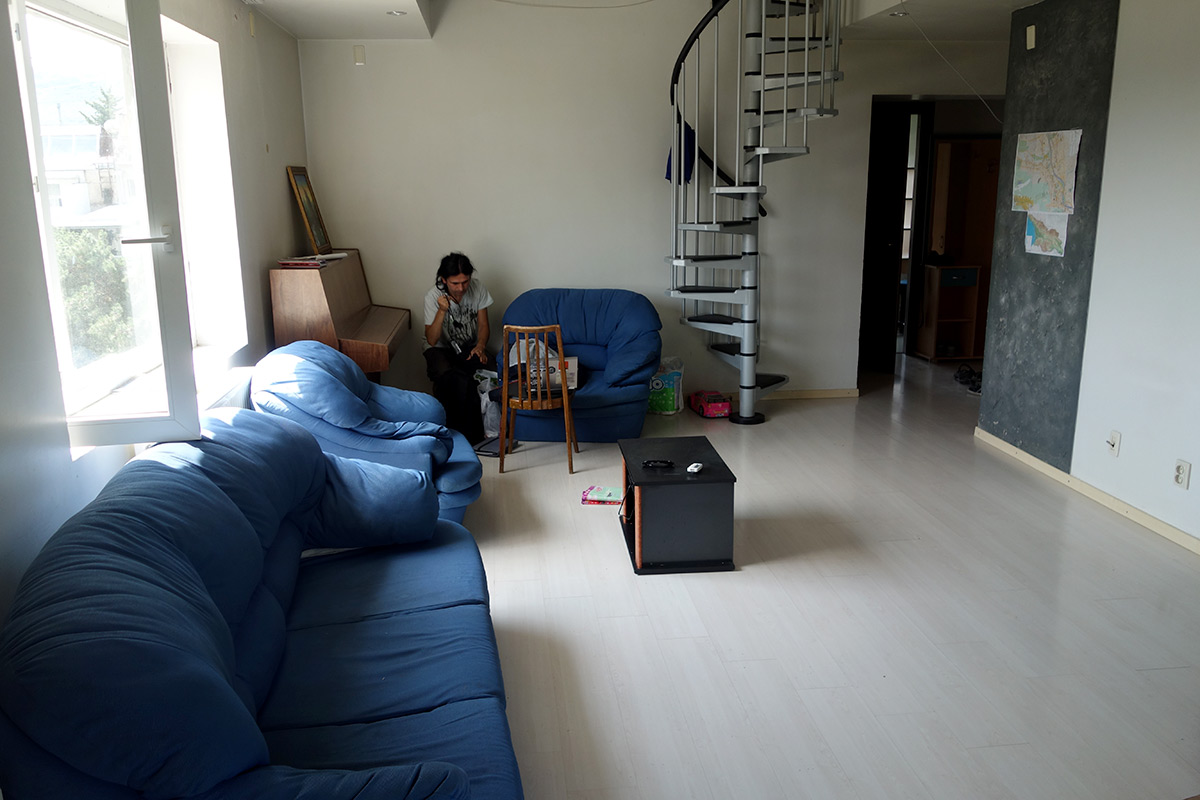 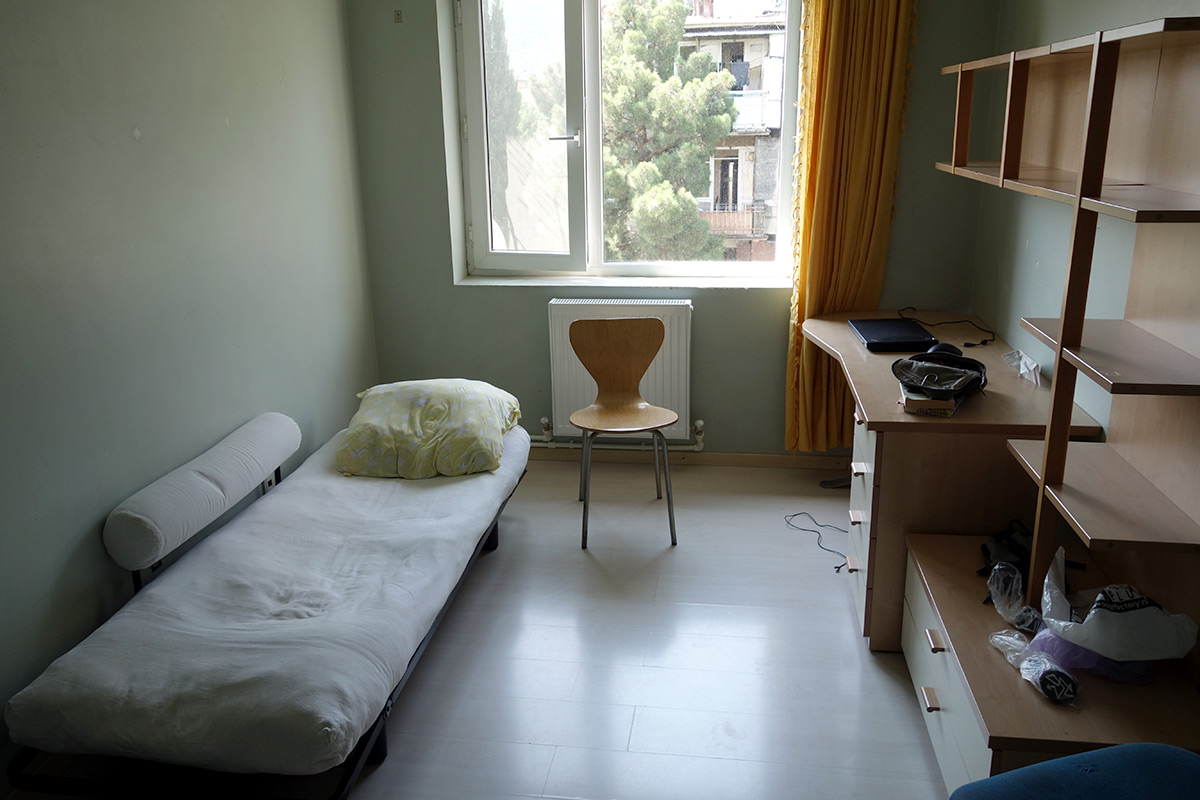 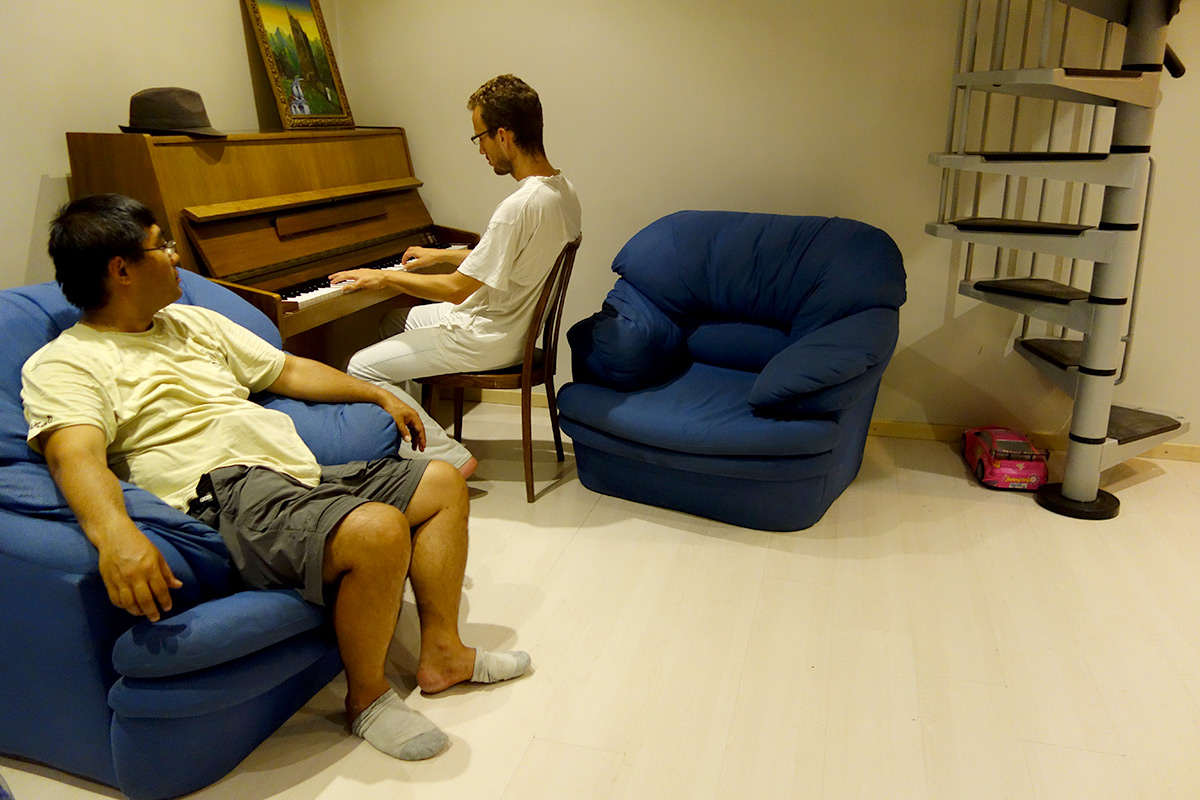 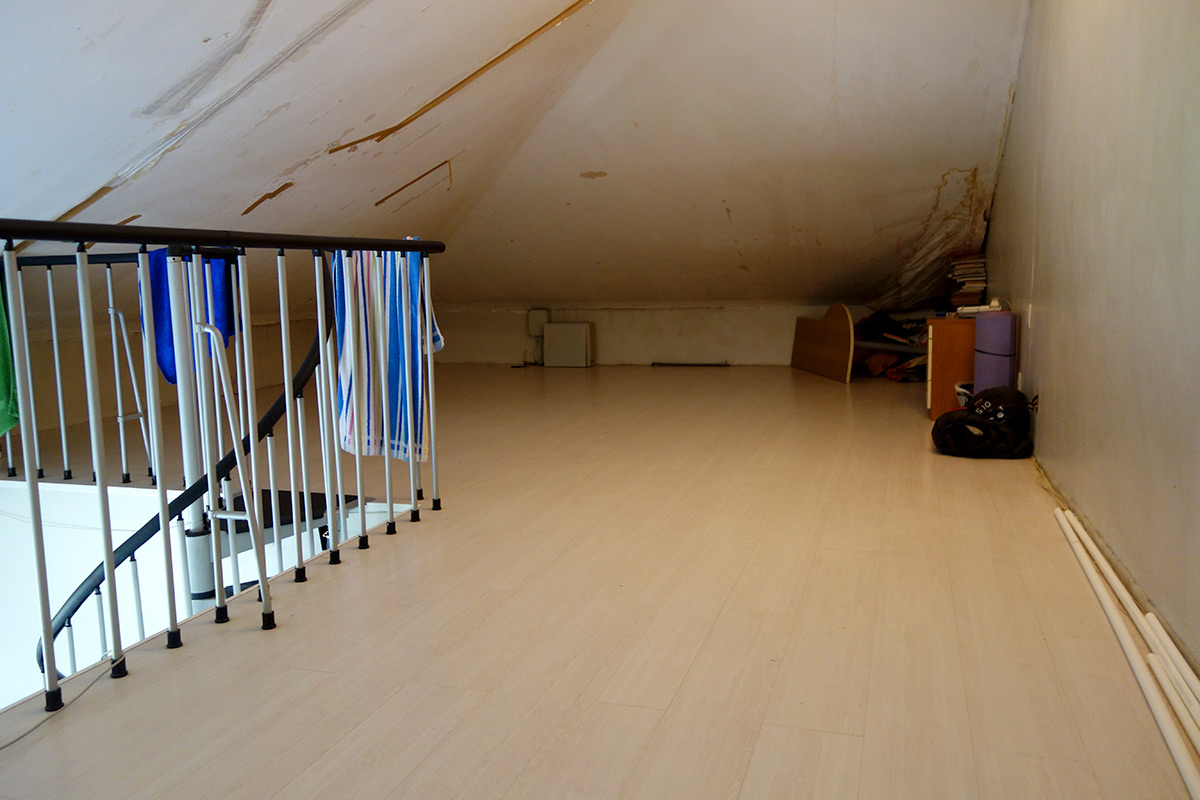 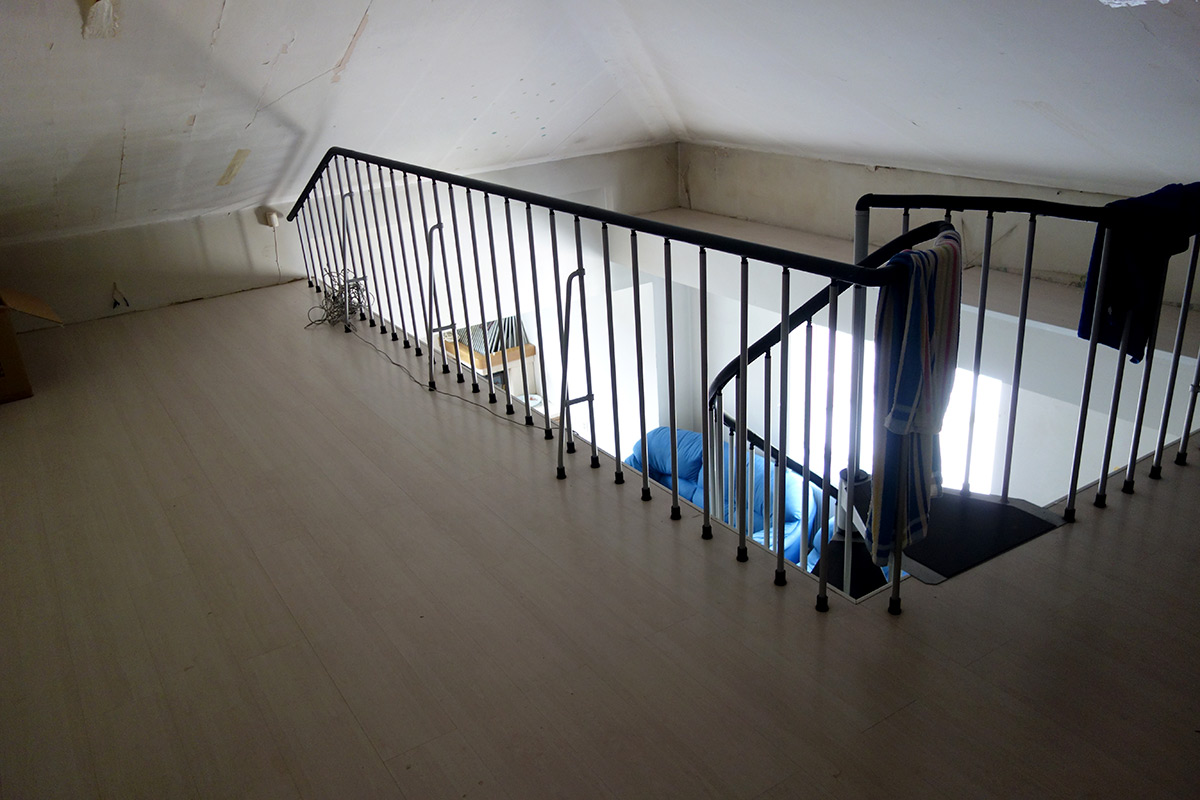 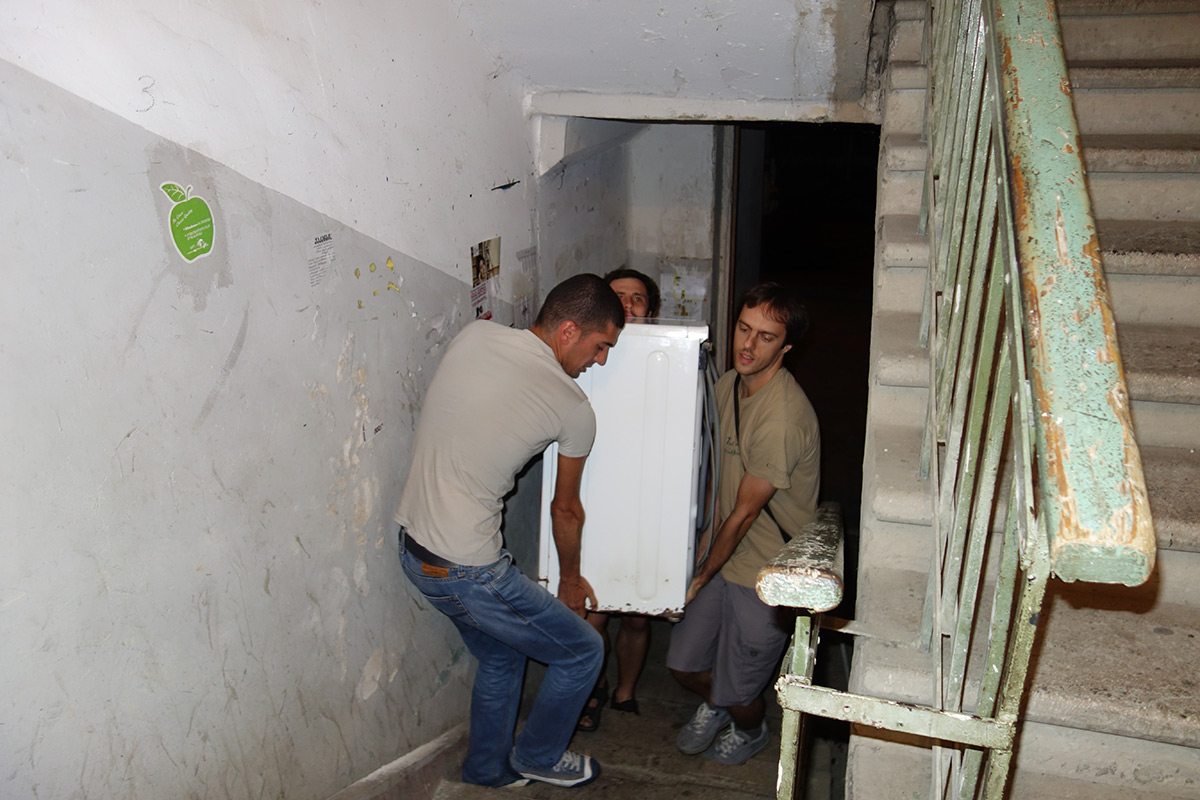 The morning after the opening, we had our first problem - the toilet got clogged. The drain pipe was too narrow, so after throwing large amounts of paper, it got clogged. As the water slowly swelled, the pipe behind it gave in and faeces covered the bathroom floor. We tried to fix it with a plunger, but it didn't work. Then, following some online how-to tips, we tried to unclog it with boiling water, to break down the paper. It didn't work. Then we tried hydrochloric acid, but it didn't work as well. In the end we called Temur to ask him where to buy a steel cable.

Some time later we got back with the cable. Twenty minutes of teamwork did not give any results. We surrendered and called a neighbour who is a plumber. Before that, we had hidden all the people in another room, because the neighbour hangs out with the apartment owner. Fifteen people who happened to be in the apartment in another room were silent as the grave. No one uttered a sound. Тhe toilet was finally unclogged and we put a warning notice to throw the paper in the bucket.

After that we went to the locksmith, who requested money in advance to try to make a copy of the large key. The three craftsmen were yelling at Temur for about ten minutes, trying to come up with advances. They did not succeed. However, the next day the keys were ready. The big key was opening the door perfectly, but not a single copy of the ordinary small key was working. Two times we went to the locksmith in an attempt to correct them, and then gave up.

On July 3rd we had 34 travellers sleeping in the apartment, which is the new Travel House record. They were mostly from Russia, coming straight from the House For All in Yerevan. During the first week we had 49 travellers from 23 countries. The number would've been greater if we hadn't recieved an unexpected phone call the day after.

The owner of the apartment called, furious about the neighbours' complaints. He said they complained about the smell from our kitchen, about someone coming by bicycle etc. Temur tried to calm him down, and we kindly asked everyone to remove their stuff and take a walk while we cleaned the apartment. We kept Maya and her 9 y/o daughter in the apartment in an attempt to appear innocent and harmless.

A few hours later, the owner arrived. First we heard him arguing with the neighbours, for twenty minutes. Then he came to the apartment. We have to leave the apartment, he said. He was kicking us out.

The neighbours admitted that we hadn't been noisy, nor did we make any problems. The only problem was that we were here. The neighbour next door didn't want foreigners in the building, it was his private space, intended for Georgian families. We offered to clean the entrance every day, we even offered more money, but it didn't help. We had a few days to find a new apartment.

We gathered all the travelers in the house and told them the news. We asked them to continue their journey the next day, or find another roof for a while. We didn't know when we had to go out, it could happen at any moment. We also asked those coming in the next few days to delay their arrival a bit.

Temur was checking the ads and dialling dozens of numbers. Of all the ads, only two owners wanted to show us their apartments. No one else wanted to rent out for such a short period. The first one was small and overpriced. Then we went to the other one, in the suburbs of Tbilisi. The apartment was great, although far from the center. It had a better configuration, mezzanine, and a piano, an indispensable piece of furniture in Georgia. However, it had to be rented through an agency – the owner felt safer that way. She said she wouldn't make any problems about the foreigners. The apartment costs $1,400, which is $100 less than the previous one. We accepted it, telling that we couldn't pay before the owner of the apartment returned us the rent money.

However, he didn't want to return all the money. He offered $1200 instead of the $1500 we had given him. He said he had paid 20% tax to the state. We said that in that case, the contract was legally binding and we wouldn't move out, unless he returned all the money. We also never left the apartment empty, just in case he'd come in the meantime and changed the locks.

The negotiations started. The owner offered $1200 and promised to return the remaining $300 in a couple days when the tax office returns the money to him. It smelled like a scam. Once we move out, we won't see him again. Who's gonna chase him and sue him in Tbilisi? We said we wouldn't move. In the end, he promised to return all the money on Wednesday, then maybe already on Tuesday, and after that he said he might even return it on Monday.

On Sunday, in the evening, we received a sudden phone call - the owner said he was coming in an hour with all the money, on the condition that we leave immediately. Temur called the owner of the new apartment and arranged that we sign the contract in two hours.

We packed quickly. We took everything we had bought, not leaving a single thing behind, not even the wireless door bell that we didn't need at all anymore. Temur's friend, David, came to pick us up by a huge car, big enough to move all six of us and our stuff. Takahiro followed us on the motorbike.

In front of the new buiding, two old ladies curiously looked on from the balcony. The owner came and we entered the new apartment. Temur signed the contract and we got the keys. There was only one thing left. We went to the landlord's place and, two years after carrying the fridge, this time we carried a laundry machine.

The Travel House is open - again.