Christmas Eve. I finished packing my backpack. I looked through the window in disgust - the blizzard was still raging. It doesn’t matter, I thought to myself, I'll spend the whole day on the bus anyway.

I took the backpack, closed the door of the apartment in Pristina and called the elevator. It was out of order. Again. I walked down from the seventh floor, went around the garbage bags at the entrance and stepped into a deep puddle with both my feet. I felt the water filling my shoes. It doesn’t matter. There's a warm bus ahead.

At the steering wheel of a bus with sign Mitrovicë, I found the driver eating a sandwich and looking at me and my backpack with red nylon cover. A peace of cabbage fell from his mouth on the instrument board. I stepped inside.

Instead of the answer, he motioned to me to get inside. There was no heating. Only the draft.

The riverbank just outside Mitrovica was filled with plastic bottles. I got off at the last stop. I was trying to figure out where to go, in order to find the bridge across the Ibar river. I’d been told I couldn't cross the main bridge, since it’s been barricaded, but there was another one I could use. I stopped a passerby to ask for the directions. I opened my mouth and asked something in a language I'd never heard before. I didn’t want to ask in Serbian - just in case. I didn’t to ask want in English either, because it felt stupid.

- Sprechen Sie Deutsch? – the man asked in reply to the sound I produced.
- Nein. Ehm, do you speak Serbian? - I asked in Serbian.
- Of course, bro’. What’s up?
- How can I cross the river?
- Huh, it’s quite a walk! It’s at the opposite end of the town. Go ‘till the end of this road, and then ask someone for the Bosnian quarter. That’s where the bridge is.
- Thanks!
- You’re welcome. Cheers.

Squeak, squeak. My shoes were still completely wet. At least the snow had stopped. I crossed a small traffic circle and saw a bridge in the distance. With barricades on it. Let’s try that way anyway. Closer to the bridge, the street was completely deserted. There were only Carabinieri, loudly laughing at something. 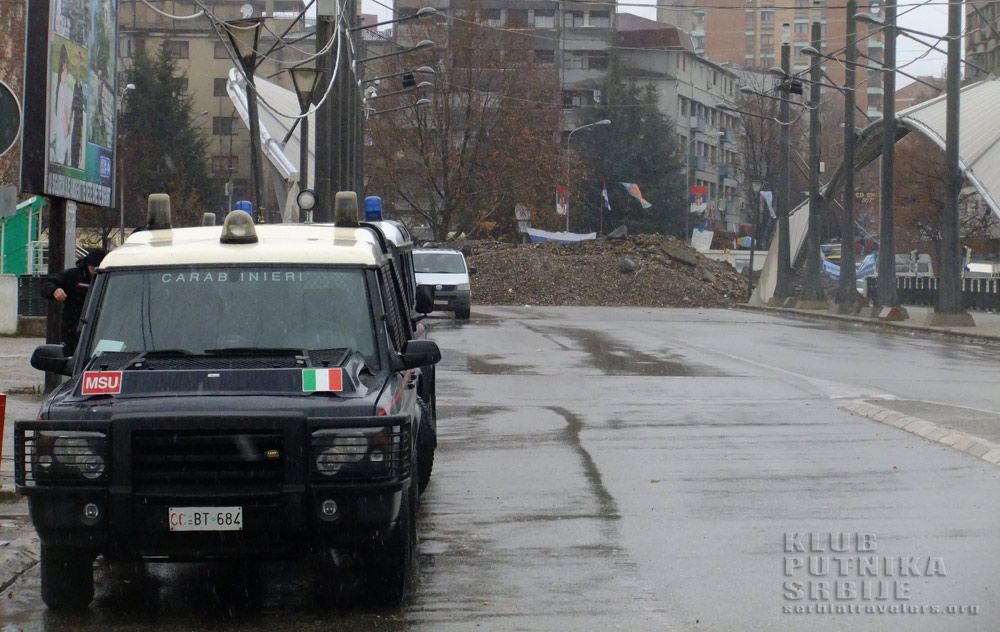 I went around the barricades. Around me were the flags of Serbia. Prices were in dinars, instead of euros. An advertisement for Zlatiborac1. People carrying Yule logs2.

- Sorry, do you know where is the bus station? – I asked the first person I saw.
- Across the street from the market. Just continue straight about a hundred meters. You can’t miss it.
- Great. And do you know when there's a bus to Belgrade?
- What time is it now... There's one in half an hour!
- Thanks a lot!

I found a small eave which was supposed to be a bus station and sat on a bench. The station slowly started to fill with people and luggage. I hope there will be free seats, I thought to myself. I felt my waterlogged toes starting to freeze. The wind, blowing from all directions, wasn’t helping either. 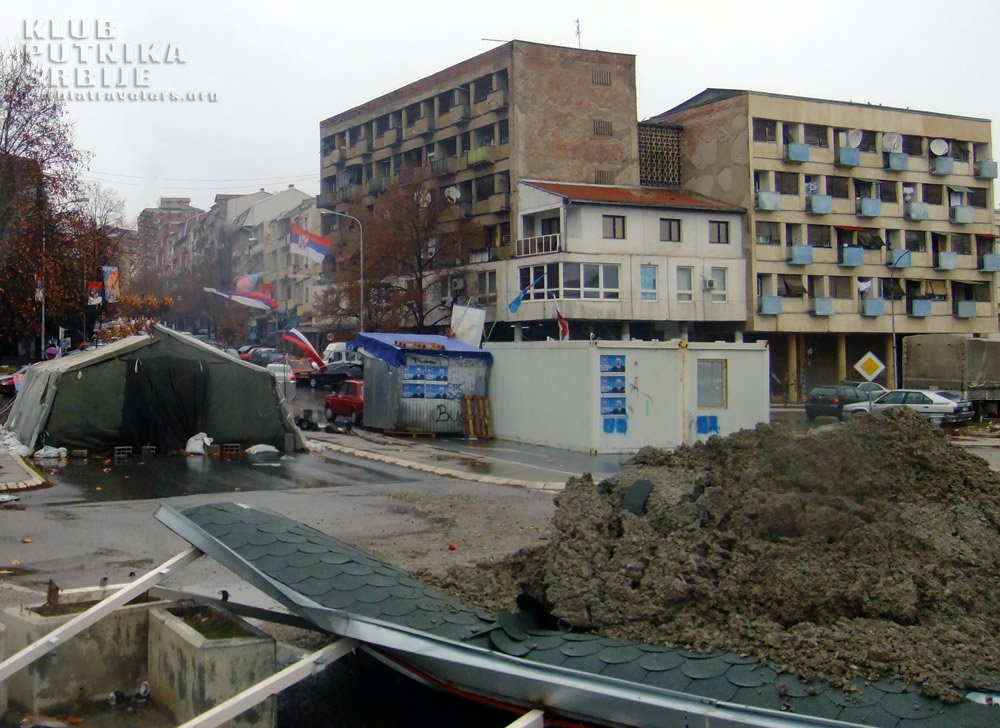 It was time for the departure, according to the schedule. Around thirty people gathered at the station, most of them with large bundles. Another fifteen minutes passed by.

- Ah, that Sava... he’s late again! – complained the woman next to me.
- Idiot, always the same story. I don’t even know why the fuck they hired him as a driver in the first place – added someone.
- Nah, I dunno. I just hope he comes soon. God dammit, it’s not his bus, but the company's. I'm gonna complain, lemme tell you.
- So you should. Our asses are getting frozen here.

Some were nervously tapping their feet, some blew at their palms, others looked down the street in despair. The bus was already half an hour late. Pain started creeping into my toe bones.

- I've just phoned the company – said a man. – They said, as soon as Sava finishes his coffee, he'll be on his way.
- Oh dear lord – one man shook his head and leaned onto his bundle.

Half an hour later, the bus finally appeared. People started cheering. The bus drove past us and went away without stopping.

Ten minutes later, another bus came. There was no cheering. This time everyone was cautious. However, the bus stopped. Passengers grabbed their bundles and pushed into the bus. I waited for everyone to get in. Then I approached Sava the driver and asked for a ticket to Belgrade.

- To where? We’re not even going there. This is to Zubin Potok only.
- Zubin Potok?! – I asked in disbelief – All these people are going there?
- As you can see for yourself – Sava replied.
- Jesus! And when’s there a bus to Belgrade?
- How should I know?

I got off the bus and sat on a bench. There was no one else at the station. Nor was there another bus. Minutes were melting, while I was freezing.

So I waited. An hour passed. I waited more. One more hour went by. A woman arrived to the station carrying a suitcase.

- Exc... – my face was frozen. I tried again – Excuse me, where are you going?
- Belgrade.
- You don't mean there’s a bus? – I asked hopefully.
- Yeah. It was supposed to be here three hours ago, but never came. I phoned the company. They said there will surely be one now.
- I don’t know if it'll manage to break through – a newcomer joined in – yesterday the mountain pass was covered with snow.
- Maybe we’ll have to go via Novi Pazar. Doesn’t matter, as long as we manage somehow.

Shortly after, a bus arrived. "Belgrade via Kraljevo", the sign said.

The heating was on. It was warm. Finally! It's so good to be inside. A few more people came and we departed. Soon enough it started snowing again. First only a couple of flakes, then more and more, and finally the full blizzard. After a while we turned off the main road, since the border was heavily barricaded, and started ascending the narrow mountain road. It was covered with snow.

When we reached the peak, the bus entered a bend in the road and the driver violently slammed on the brakes. We almost hit a truck coming from the opposite direction. The road was too narrow for both vehicles. Our driver got off the bus and went toward the truck. While he was walking, our bus started sliding back. In horror, I realized that we're going down the slope. With no one at the steering wheel! People started screaming. A man from the front seat jumped at the wheel and pressed the breaks. We landed in a side canal. The driver, distressed, ran into the bus.

- Everybody get out, quickly! – he yelled at us.

We got off into the crisp mountain air. The blizzard was not letting up. The driver borrowed chains from the truck and put them onto the wheels. He pressed the throttle – and ended up even deeper in the canal, along with a sharp cracking noise. Plastics and the air pipe broke. He then phoned the road service, which came after one hour. Another hour spent outside, in the snow.

People from the road service took out shovels from their jeep and gave them to us passengers, to spread some soil on the road, while they're giving us instructions. I took out my camera and started taking pictures. 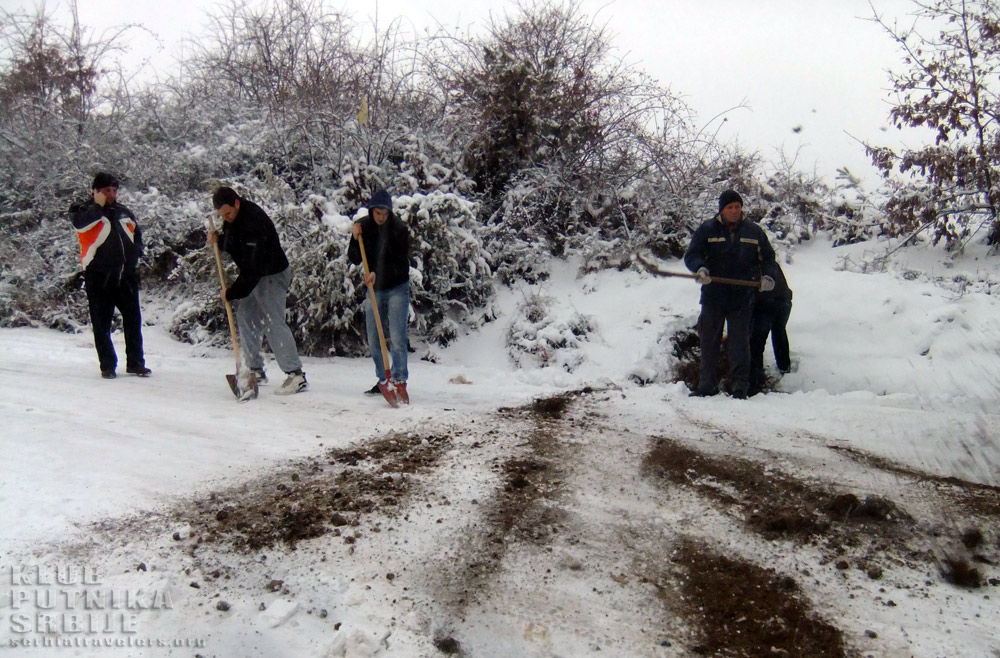 - Oh, will you send it to the TV? – asked an elderly woman – Everyone should see this!
- Great, we’re gonna be on the news! – added another passenger.

Meanwhile, it started getting dark. They’ve fixed the air pipe. It was the time for a few more futile attempts to unstuck the bus, and then for putting some more soil on the road. A guy with a shovel approached me.

- Are you fuckin' nuts?
- What? Why?
- We're busting our asses here and you’re taking pictures! Won't you help a little, for fuck's sake! 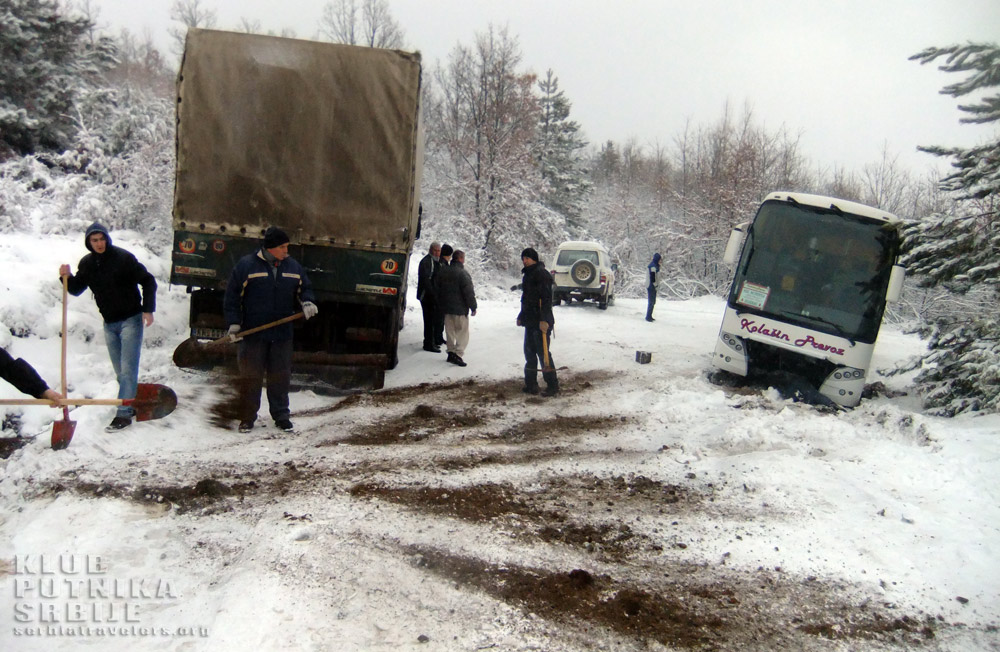 Ashamed, I put the camera into my pocket and took his shovel. But as soon as I took it, the bus managed to get out of the canal, went forward, and finally stopped on the road. Determined to make myself useful, I put down the shovel and went to push a nearby car, stuck in the snow behind the bend. I started pushing the overloaded "Zastava" car, together with the people from the road service.

- Come on come on, hit that throttle – we yelled at the driver.

The car started and went away.

In consternation I realized that my bus had indeed gone. I have no idea when did they have time to take off the chains and get on. All I could see was my bus disappearing around the bend, together with my backpack and my laptop. I started running. The distance between us was growing. I kept running, with the sharp mountain air cutting through my lungs. I wasn't thinking about what I was doing, running on the frozen road, in a god-forsaken mountain, in the dark, in the snow. My backpack was on that bus. My backpack.

I stopped, making a ballet figure, but luckily stayed on my feet. I felt pain in my chest. At least I’m not cold anymore... Then I ran back to the road service jeep.

- People... – I could hardly catch my breath – help! Please, lets catch up with the bus, with your car...
- Alright, alright. You nutcase! Get in the car.

The bus was already quite far, but we managed to catch up. My driver signaled them to stop, which they did. I got on it, frantic.

- You left me there!
- So you deserved! - said the elderly woman who wanted to be on the TV - you were taking pictures!

I took a deep breath. Then one more. I silently passed behind her, sat at the back and hugged my backpack with both my hands.

Shortly afterwards, we stopped at a crossroads at the foot of the mountain. A policeman checked our IDs and luggage and motioned to the driver to move on. We got on the Ibar road and continued north. 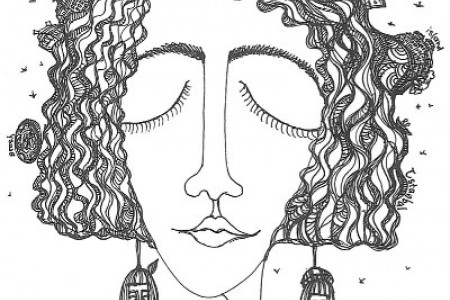 We came to my room. I entered a room lit by a faint green light. Inside there were four empty beds. Then I heard a “clack” sound. Empty walls. In a...