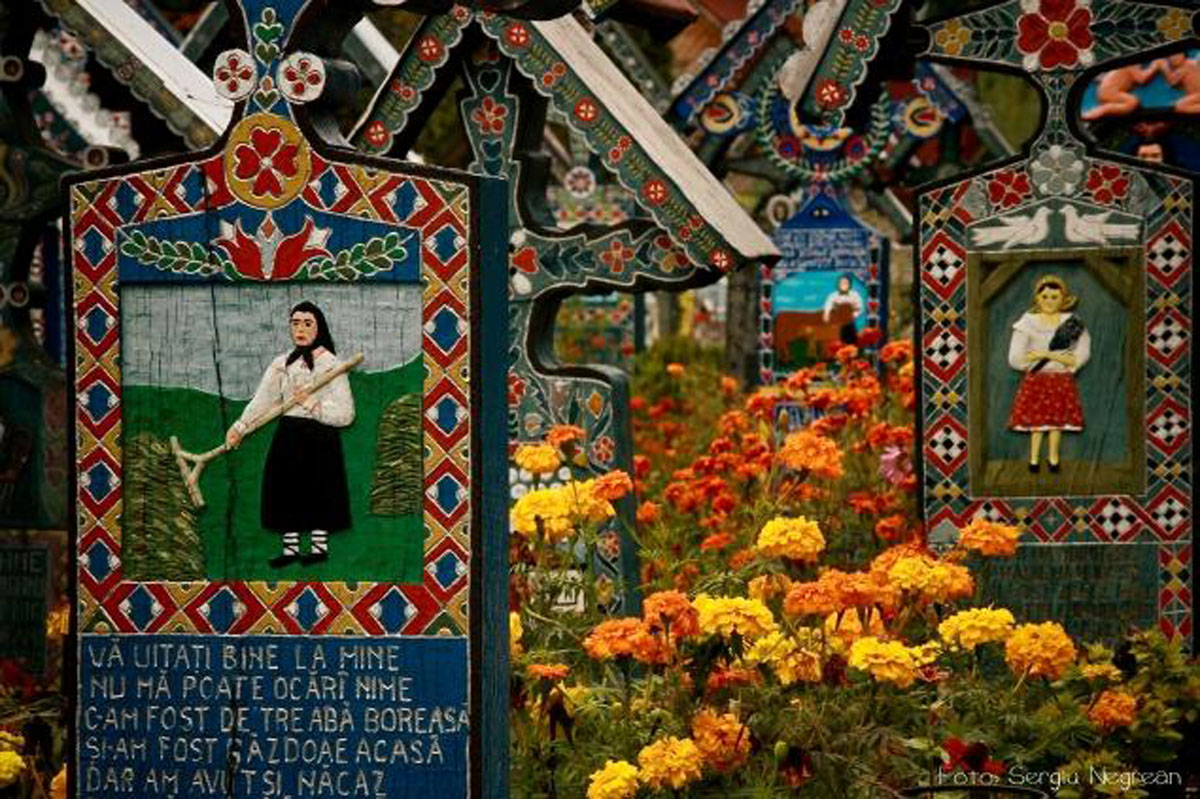 What is the first thing that comes to your mind when you think of a cemetery? Contrary to the usual depiction of the cemeteries, the Merry Cemetery is not sad or gray, but abounding in colors and brimming with life. Well, not exactly.

Merry Cemetery or Cimitirul Vesel is a cemetery located in the northern part of Romania, in a small village, behind the local church. It is renowned for its merry tombstones which depict the life of the decesed through captions and pictures. The founder of the cemetery is considered to be Stan Ioan Patras, a local artist, who carved the first tombstone in 1935. The uniqueness of this cemetery comes from the widespread belief, culturally prevalent inside the European society, that death is a celebratory occasion because it represents a moment filled with joy and hope for a better life.

Some of the stories on the tombstones are very humorous, others are peculiar, while some are tragic because they represent lives cut off by accidents or diseases. 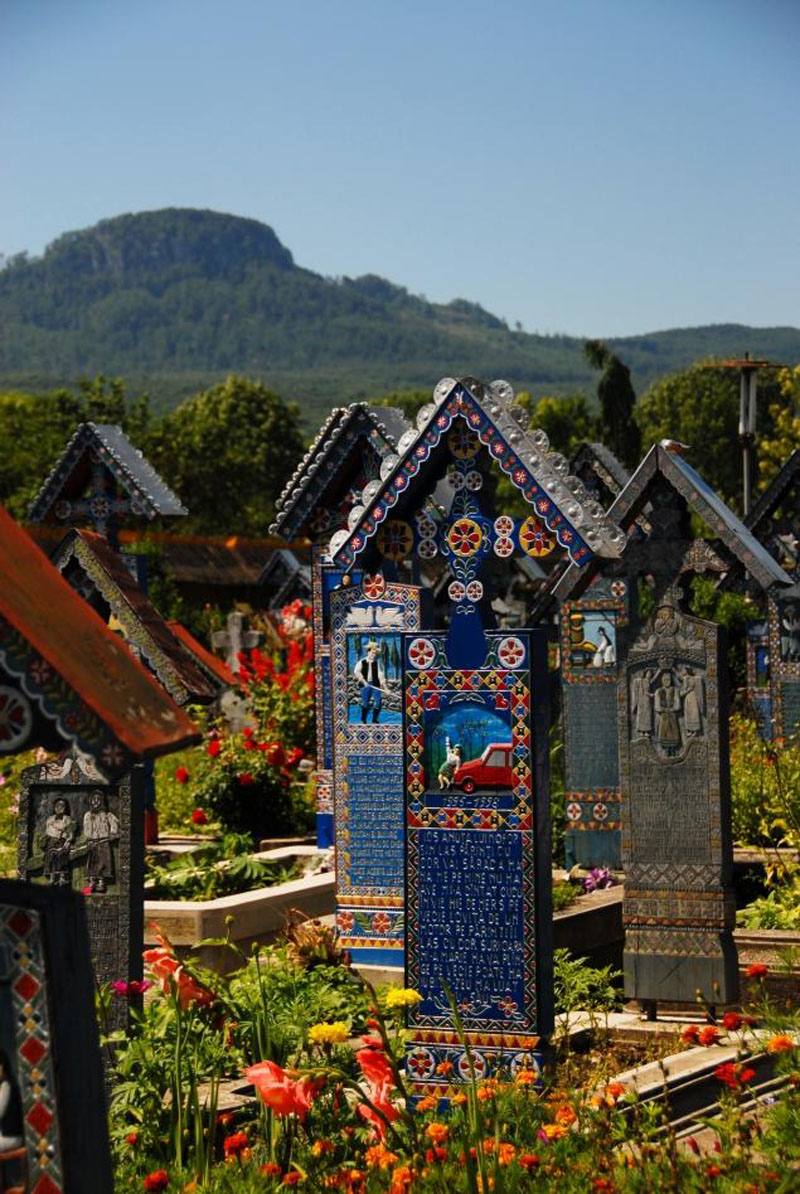 Pop Dumitru has been in charge of creating these presumed masterpieces for over thirty years. When a person passes away, the family of the deceased asks the priest to make a cross, which he carves manually. The priest decides which pictures and verses will represent the life of the deceased. The point of the images and the poems is not to make fun of the graves or their occupants, although, to be honest, some of them might be a bit indiscreet because they speak of adultery, fondness for alcohol and hostility towards some members of the family. You would expect the relatives to be offended when they see the tombstones, but that's not the case. Pop Dimitru says : "These tombstones portray the real life of the person. If he enjoyed drinking, that's what we will write. If he enjoyed working, that's what we will paint. Everything that ends up on these tombstones is true, because there are no secrets in a small town."

The verses on the gravestones are written in first person and while reading them, you feel as if you were talking to the person buried there. What you feel while reading them is that you got to know the tomb's tenant a bit better. One of the panels says:

"I rest here,
Stefan is my name.
I used to drink a lot and that's why I'm still thirsty.
So you, who are visiting my resting place,
Leave some wine behind."

Even if you can't read the verses in Romanian, you can still enjoy the stories the paintings are telling. Some of them have more than one painting, so they could illustrate several occasions in a person's life. One tomb has three images; the first one of a man and a woman in love, hugging each other; the second shows the man sitting at the table with a bottle in his hand, while the woman is sitting on her own in the corner; in the third one the man is looking back over his shoulder at his wife who is in another room with a different man.

A lot of tombstones contain images of everyday life like people working in the fields, or things and people that they cared about during their life. "Their lives are the same, but they want their death to be different." Among the tragic stories are the ones of the deceased children, which are represented as angels or being surrounded by angels.

The Merry Cemetery has around 700 graves, and although it's an extremely popular place, there is still enough space for the future occupants. One of them will be Pop Dumitru, who is training a couple of apprentices. "It can't be just anyone", he says. "They have three jobs to do. They have to be sculptors, painters and poets, all in one." 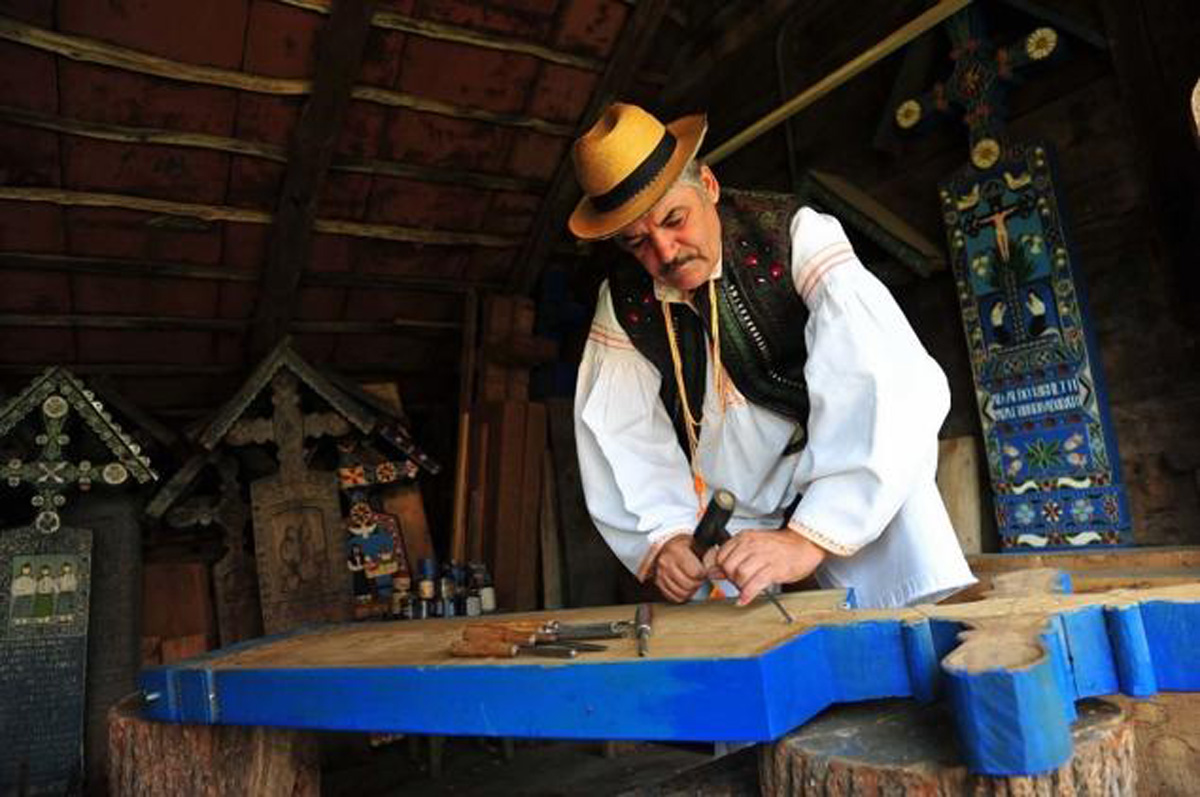 The Merry Cemetery is an idea created by Ioan Stan Patras, the man who is resting here as well. His tombstone says that he created these lively headstones because he loved people and he wanted people to visit him, even after his death. Considering that the Merry Cemetery is one of the most visited destinations in Romania, we can say that he succeeded in his wish. This place is filled with belief that death is only another big adventure into the afterlife, another beginning; and every beginning needs a joyful celebration. 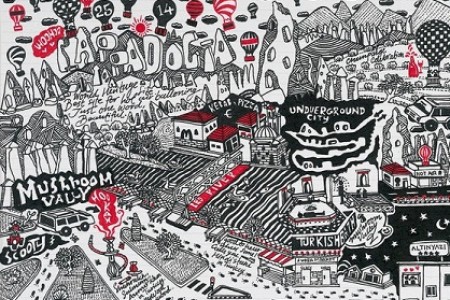