Francis Owen was an English missionary from the early 19th century. He spent some time on the court of the Zulu chieftain, Dingaan, trying to convert his people to Christianity. When Boers started encroaching on Zulu territory in Natal, Dingaan prepared an elaborate trap and massacred them. Unwillingly, Francis Owen witnessed the massacre.

At length I told Dingaan it was Sunday, whereupon he bit me to address his people and teach them the word of God. At the same time he sent Masipulu, his head servant to tell the Indoonas that theye were all to be quiet and listen attentively to me. A dead pause immediately ensued. I went forward, feeling in my heart, that I was called to testify Christ publickly in this place for the last, and the only time!

Having advanced within a convenient distance from the men, the king sitting a god way behind, I commenced by telling them that they all knew that there was a great chief above the sky. Dingaan now sent a message to us to tell us to speak up, as we did at Namabma. Raising our voices I proceeded to say that this king was greater than all kings, greater than my king, greater than their king: that they ought to fear their parents, they ought to fear their king, but much more ought they to fear the great God; they ought to do what their parents bid them, what their king bid them, and also what God bit them! We have none of us, however, done what God has told us to do. We are all sinners before him: He is displeased at us: each of us has a soul that must live for ever when the body is dead, but that our Souls, by reason of sin, are filthy and that they must be washed. 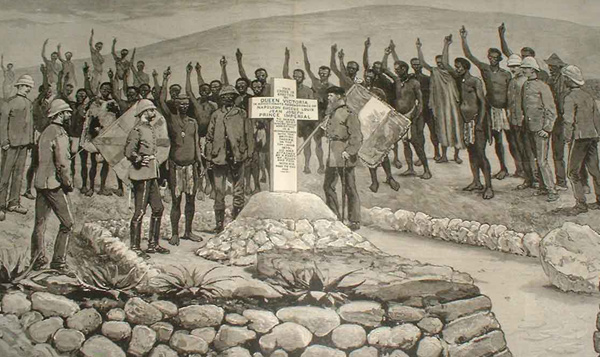 Until this moment the greatest stillness and attention prevailed, but now the contradiction began, and such a caviling and stormy audience never did I before address. It is impossible to give an adequate idea of the dispute that lasted for nearly 2 hours; one cavil succeeded another or was repeated 10 times, whilst no reply was made to my answers. The Indoonas and the king were the chief objectors, the latter sitting at some distance behind and speaking ow, his servant Masipulu shouted out to my Interpreter all his remarks. First I had to turn to the Indoonas, then to the king as they successively opposed me. When I had begun to speak of the need of spiritual washing in order to introduce the Gospel the subject was treated with scorn. One asked if we were to be washed in the river. I said not with water, but with blood! Whose blood was the natural reply. The blood, I answered, of the Son of God, who was Jesus Christ. Where is he? they asked. In heaven, I said, but once he came down to earth, and... Whom did he leave behind to wash us? He washes us himself with his own blood. It is not our bodies that he washes, but our Souls. He washes all who come to him by faith. Away, it's all a lie. I persisted in crying that Jesus Christ shed his blood, and that if they believed in him, that he came down from heaven, that he died for them, their souls would be saved. They asked me how this person was killed and who killed him. I said, wicked men nailed him to a tree. Dingaan then asked if it was God that died. I said, the Son of God. Did not God die, he asked. I said God cannot die. If God does not die, he replied, why has he said that people must die? I told him it was because all people were sinners, and death was the punishment for sin, but he would raise us all again from the grave.

This gave rise to innumerable cavils. They wanted me to tell them the day and the hour when we should rise again, who would be witnesses of the resurrection, who would be alive at that day. They said if any generation had been seen to rise from their graves they would believe. I told them that Jesus Christ rose again the third day, and that he was seen by his 12 servants, and afterwards by 500 persons at once, and that his servants raised a great many other people. Dingaan asked me how many days Jesus Christ had been dead. If only 3 days (said he), it is very likely that he was not dead in reality but only supposed to be so! I said, that when he was on the tree a soldier pierced his side from which came forth blood, and that blood, I said, if believed in washes away sin.

After a great deal more combat they told me I need not speak anything more about the resurrection, for they would not believe it. They had no objection to God's word, but they did not believe in the resurrection... This doctrine indeed appeared to be "foolishness" to them and as such utterly rejected: but I was encouraged to hope that the Spirit himself would hereafter unfold it to them, showing them its true import and necessity. It might I hoped be a foundation on which to build at a future time, and doubtless they would remember more, than if my discourse had proceeded in a natural strain.

I many times broke away from their cavilings and exhorted them to believe instead of objecting. The king once asked if all men would go to heaven? I told them plainly, if you believe the words which I now speak you will go to heaven, but if you believe them not you will all go to hell. They wanted me to give proof that Christ was now in heaven; as who had seen him there. What the persons who took him up into heaven said when they came back again. Umthela remarked that if he saw a bird fly ever so high in the air and he looked at it steadfastly it always came down again. I told him he went up by his own power, in the sight of his disciples and that he would surely come again, when every eye should see him.

From the book "The Diary of Reverend Francis Owen M. A., missionary with Dingaan in 1837-38 together with extracts from the writings of the interpreters in Zulu, Messrs. Hulley and Kirkman" (Cape Town, South Africa: Van Riebeech Society, 1926)