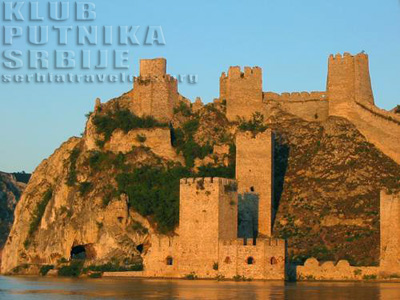 Golubac fortress is one of the best preserved medieval fortified cities in Serbia. It is located on a rocky slope, at the very entrance to Djerdap gorge, and its lowest part juts out into the Danube. It is believed to have been built in the early 13th century. It consists of irregularly shaped narrow walls, that connect nine massive towers. Throughout the history, Golubac was alternately ruled by Hungarians, Serbs, Austrians and Turks. Despite many big battles that took place here, Golubac is still in a rather good shape and offers some interesting sights.


Golubac is first mentioned in historical document in 1335, when it used to be a fortress with a Hungarian military garrison. The town is believed to have been founded much before that, but today it is not possible to determine when that was, nor who the founders were.

Golubac started to develop in mid 14th century, after the death of king Dragutin, in times when Turks started being a growing threat, a common enemy of the Hungarian and Serbian state.

During the reign of Despot Stefan Lazarevic, Golubac belonged to the Serbian state, and after his death his successors’ interests collided with those of Hungarian empire. This is why Hungarian king Zigmund unsuccessfully sieged Golubac in 1428. Golubac was then governed by a duke called Jeremija who was so afraid of the Hungarians that he let the Turkish garrison enter the fortress.

After this, king Zigmund decided to build a fortified town of Laszlovar, on the other side of the Danube, just across from Golubac. He got a unit of men from Poland lead by Zavisa Cerni, who became famous for his heroic deeds and finally got killed trying to conquer Golubac.

After this, the Sultan decided to send help to the garrison residing in Golubac. This help was Rumelian commander Sinan, who lead Turkish army in a bloody battle that resulted in conquering Golubac and banishing king Zigmund who was lucky to stay alive.

The story says that, in the old days, the narrowest part of Djerdap gorge used to be closed with a chain, that prevented ships from passing through – except, of course, the ones willing to pay.


Golubac can be reached by any bus going from Belgrade in the direction of Kladovo.


Golubac fortress is what is left of the ancient fortified town. It consists of nine towers, between 20 and 25 meters tall, connected by approx. 3 meters tall, up to 2 meters tick elongated walls. Five towers belong to the first, oldest phase of the construction of the fortress, and the other three were added later.

In the lower part of the town, on the Danube coast, what is left of the former palace can be seen, to which Turks added a low eight-sided tower to protect the city from the western side and secure the harbor. The main entrance was on the western side.

At the Golubac fortress the Danube gets up to 8 kilometres long, forming a huge lake with a big island in the middle.