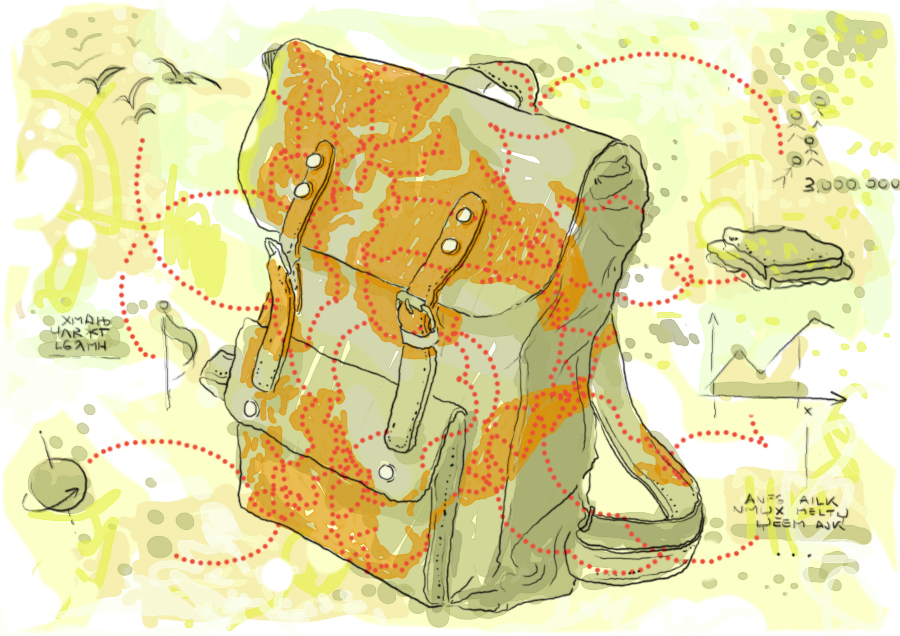 He entered the house back in '82 when my sister bought him while studying in Russia. His price couldn't be converted into any of today's currencies − he cost roughly as much as a metal button on a pair "silver jeans" pants bought in Trieste and then exchanged for an abnormal amount of rubles in one of the rooms of the Leningrad Hotel. He was a classic soviet product: garishly red, bulky and ugly, but as time will show, virtually indestructible.

He did his first haul on Čačak-Belgrade-Čačak railway line, transporting heaps of text books intended to assuage the guilt of studying at home, then returning with boxes overflowing with cheese, kaymak, stuffed peppers, meat pies, cookies, freshly washed beddings and clothes.  He was irreplaceable for numerous moves between student's campuses and rented rooms. It was then that one of his main traits already became obvious: unlimited capacity. His bowels were swallowing everything, and the sewn-on canvas part extended his dimensions to undreamed proportions. On a city bus he would take up the space of at least two other passengers, always catching someone with the poles that were sticking in all directions, provoking acerbic comments.

He first crossed paths with his western brethren in Venice in 1987. Flamboyantly coloured, small, functional, they looked down on him with contempt and derision. But they didn't have to do his kind of drudgery, hauling up to 20 kg of food all the way from Belgrade, thus saving his master's modest budget. He was, however, the widest pillow on the square next to the railway station, guaranteeing double sleeping space between tightly packed sleeping bags of Western European youth.

In the Far East he was equally unadjusted. On the third-class Chinese trains, after sizing up his master's nose (imposing for home standards, downright sensational in China) with cries of disbelief and then feeling it with their fingers, the passengers would start to poke him and move him around. While his owner's head was sticking far above the seat tailored to a child's dimensions, he precariously rocked in the narrow overhead luggage compartment, followed by the passengers' terrified looks.

Beijing was where he had his first moments of stardom. After a three-day biblical downpour, the inhabitants of a hotel were faced with a painful awakening; straight from the bed they leapt into ankle-deep water. Curses in all imaginable languages accompanied the search for sneakers, sandals, socks, vests and underwear that sluggishly floated around the huge room. The latest technological miracles from the world of backpacks were crouching or lying, crestfallen, swollen with water, and he was the only one who stood proudly dry and intact, on his long poles that finally justified their existence.

Only once did he feel at home. It was in Tajikistan, Uzbekistan and Kyrgyzstan, where nobody found him odd. Discernibly aged and faded, he perfectly blended into the sad remains of the past that dragged themselves around the ruins of the glorious Soviet empire.

A conductor on a bus in Iran used the black marker as a knife to carve into his forehead the word "foreigner" in Persian script, thus confirming the truth of his existence that had followed him all his life: an eternal wanderer, a loner and a misfit.

The journey back from Iran was the pinnacle of his career.  Dozens of huge volumes of Oxford English Dictionary along with travel guidebooks, collections of Persian poetry and a Persian-English dictionary which were pirated in Iranian printing houses and sold at giveaway prices pushed him to the limits of his endurance.  When he saw him there, lying powerless as a red-painted pregnant sow taking up half of the compartment, the face of the Bulgarian custom officer stretched into an avaricious grin, and his lips started oozing the dribble of pleasure. "Ooooo, bro, what's the nice big thing we've got for taxing?" "Books." "Ha, ha (sarcastic laughter)! All this − books?" "All". "Well let's see them books then!" When he finished, the custom officer stooped towards the exit in utter consternation. With minor variations, the same scene was acted out several more times. The entry stamp in Dimitrovgrad made official an historical event: a tax free journey from the border of Turkey and into Serbia. Then, at the Belgrade train station, my heart skipped a beat. For the first time I wasn't able to lift him, so I had to summon a luggage cart to help me.

I think he felt that the end was nearing when he departed for London in 1998, on his last big journey, and that it was then that he started submitting to his fate. It is not enough to say that he was a veteran. His garish red colour had faded when a truck driver in Tibet threw him into a trailer full of dust and left him locked up there for a couple of days. The dark stains of liquids of unknown origin, spilt God knows when, started emerging on his skin like age spots and nothing could wash them anymore; the belts were still whole, but in tatters. That was the first time he got lost, and found his master with a couple days delay. For the first time he fell prey to theft.  He was always so unsightly, inciting rather pity than a wish to steal. Just in case, the tops of the outside pockets were littered with dirty laundry and socks, which would discourage even the most desperate thieves from getting into further exploration. Then someone nicked twenty packs of "Bond" from him. If you think that the whining is disproportionate to the damage, bear in mind that the cheapest pack of cigarettes in London cost three pounds, and calculate the loss yourself.

The successor was a light and small “Welshman” covered in innumerable add-ons and pockets with soft pads for the back.  It was a discreetly dark green coloured backpack with a black streak and multi-year warranty.  The veteran didn't heed him much, and he reached Belgrade with dignity and calm. When I put him down, the main pole broke for no good reason. Or better said - it burst, as a heart that had no reason to keep fighting. He recovered like one recovers from a severe heart-attack. Countless times I was eager to clean him up and put him away in a safe place away from the moths but I never touched him again. I feel the same kind of guilty conscience felt by those who leave and forget their closest in a nursing home; my own betrayal stings me. Then I start deceiving myself, conjuring up the day when I will dust him off, take him with me and go to Tajikistan once again. I will give him to someone who will travel and carry him along all the way to Samarkand or the Pamirs. He will breathe again, happy that he exists, and he'll finally be at home, and I will have paid my dues and calmly leave with the "Welshman" on my back.

This article was originally published in Vreme magazine, no. 665. It is published here with the author's and the editor's permission. Translation by Lazar Pascanovic.