A personal account of everyday happenings in Mogadishu, Somalia, written after 15 days spent in the heart of the city.

I dont even know how to start relating the experiences of the past two weeks in Mogadishu. Let me start by saying that this time something really made me laugh when I got to the airport. When I was filling the entry form at the Mogadishu Airport there is this last part that read "Weapons carried with". I laughed so hard such that had the authorities noticed me I would have been bundled into the next plane to Kenya. It sounded as if they meant that bringing in weapons was ok so long as you declare them at the airport.

I was there for 15 days and, as usual, I found the Somalis generally deeply human, kind, helpful, resourceful and all things nice. This time the journey was really different coz it made me realize that deep down this is what I want to do.... always. There are so many risks involved, but if I want to be a top diplomat and have no experience of the daily sufferings of common people, then I cannot contribute to any meaningful change. Secondly, the media is fond of peddling half truths - of course, the pictures they show on Somalia are real, but there is that other side they ignore; that even within all that violence millions of people are still struggling to find a way to survive. 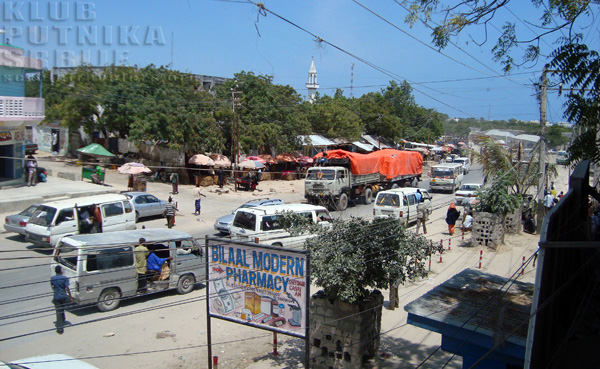 These people are really strong; I think they are resigned to their fate, they go about life knowing that anything could happen to them, this minute they could be alive and the next minute they could be gone... That is how I felt. They really give a lot of meaning to the word Inshallah (God willing).

Thirdly, its not all Somalis who enjoy the violence. There is this armed opposition group (mark my words - not terrorist group) called Al Shabaab, that has openly declared it has links to Al Qaeda. They have killed a lot of people, and so have the government forces. Most recently they publicly whipped women who were found to be wearing bras, claiming that that's a western phenomenon. There was also a time when they were plucking out people's teeth; people who had silver or gold teeth. So smiling in Somalia was dangerous for a while.
Talking about an ordinary day in Mogadishu... Your ordinary day would be riddled with gunshots. That's your typical safe day: gunshots every ten to fifteen minutes. Interestingly, people are not really bothered. Business goes on as usual because, as I had already said, you live only for now, without knowing what may happen tomorrow. I am normally bothered on the first two days and by day 3 I tune in. I was staying in a hotel that was very famous during the early 90s, just after the Cold War, during the botched American intervention. The hotel is a bit hidden and a bit "safer". Sometimes I would be enjoying my beauty sleep when, all of a sudden, I would hear heavy gunfire exchange just outside, either at the back or front of the building.

Now, that s your normal day. That means there were other, abnormal days. An abnormal day would be when the government forces and Militia (who loves to harass the locals) and the African Union (AMISOM) forces would engage the Al Shabaab with heavy artillery. Then I would be in another world. The hotel is not very far from the AMISOM compound. The Al Shabaab are not trained and do not have skills in launching mortars and artillery; instead of calculating the precise distance of attack, they would first direct their mortars towards the AMISOM compound, then quickly move to another area, because they know the AMISOM forces would calculate the correct radius from where the attack came from and bang! They go. So they engage AMISOM in frustrating guerrilla tactics; when they hit, they move very quickly, and launch more artillery at their next stop. Since they never bother with calculating distances, they end up shelling civilian areas; that's why you find high civilian casualties. Another tactic they use is that they also hide and sometimes launch attacks from densely populated civilian areas, so you can never tell the difference between Al Shabaab and a civilian. That’s how AMISOM also ends up killing civilians as they target the Al Shabaab among them. But in between the battles there would be periods of lull... The quiet periods are usually the most dangerous, because then you know that someone, somewhere, is planning a deadly attack, and you do not know exactly where they will hit.

The hotel I was staying in only had three occupants, the only foreigners being my fellow workmate and I. A lot of times, when heavy fighting started, we would run to the ground floor, because the hotel did not have a bomb shelter within the compound. So we would hear mortar and heavy artillery filling our world... With loud bangs that would easily drive you crazy. That s how life was. We were rarely allowed to move around, but we insisted on going to the office at least 5 days in a week, and worked from the hotel twice a week. The trips to and fro the office would be dramatic, as we would rely on the latest intelligence from the security officer. Then we would be driven at break neck speed to and from the two points, to avoid abductions. Even when working from the office, we would hear gunshots from just outside the building. I was being told that, just a few months ago, mortar found its way into the building, and women and children (who were attending a clinic on the same floor as the office we were working from) got killed. I could see the effects from the broken grills and holes left by bullets on the walls as well. But in all these I had faith that I would get through only by God's protection, and I moved around never thinking about today or tomorrow. Actually, I never met a single Westerner in Mogadishu, never did. As for foreigners in Mogadishu, I met one Kenyan doctor working with 2 Iraqis, one Syrian and one Pakistani at Madina hospital. We met at the airport, and he shared photos of people he has treated over the last 3 months since he came to Mogadishu; faces that had been disfigured by mortar, bullets, spilling intestines and so on.

Foreigners are advised not to go to Mogadishu. In fact, you don’t even need to be advised. Whites are more at risk; the two French men who attempted to sneak in were abducted by Al Shabaab at the sister hotel of the hotel I was staying at. They were, however, later released. The other foreigners I met were the AMISOM officers (African Union Mission in Somalia made up of Ugandan and Burundi forces supported by the UN). It was nice to chat with the officers who were more than happy to speak in Swahili for once in a long while. Word in the street has it that they are very poorly paid, about 100 USD per month for doing such a dangerous job. Of course, Kenyans are also at risk, because the Al Shabaab have issued a number of threats to the country, and several Kenyans have been abducted. While I was there I had to dress like a Somali woman, all covered, and I did fit the bill and made sure I didnt open my mouth in public. I also had to adjust to working 6 days a week. They only have one day as the weekend. That is Friday, which is also the prayer day. So Monday would start on Saturday.

Somalia has always got me reflecting about a lot of things. Every time I go there I become more convinced that the only way peace could prevail is if the international community gives Somalis their space and let them solve their own problems. They (IC) have been making the same mistakes for, the past 20 years. I should probably do a publication on Worst Practices in Peacebuilding. Right now the current transitional federal government is beleaguered. 99% of the South Central Somalia is occupied by either Al Shabaab, Hisbul Islam or other smaller opposition groups, while the government has been crushed into a corner in a small part of Mogadishu, and is being protected by AMISOM forces. Remove the AMISOM forces from the equation, and we will have yet another government collapsing again! The Americans are also more than happy to keep supplying the government with arms. The last batch of arms was sold to the Al Shabaab by government forces... And its the civilians who bear the brunt of these misplaced weapons. If there is a country where conflict has become a routine part of life, it's Somalia. It may take many generations to reverse the status quo.

When I sat at the Mogadishu airport last Monday, there was a looming showdown between Al Shabaab and the government forces. We were therefore rushed to the airport 4 hours earlier with the argument that it was the safest place. I asked the security officer where we would run to in case the Al Shabaab struck the airport. He convinced me the airport was the safest place but I argued otherwise, first because they would want to gain control of the strategic airport, and second because movements of people in and out in addition to the high density of humans there may make for possible successful attacks on their side. I would therefore not have vouched for a run into the airport building. I was not surprised that 3 days later, on Thursday last week, the Al Shabaab targeted the president on his way to the airport and launched mortars just outside the airport gates.

I have learnt to love the Somalis. I was always scared of them and never particularly liked them, but I have tried so hard to see the other good side - they are kind, strong, hardworking (they always make it in business wherever they go), resourceful (I have learnt more from them than from the hundreds of books I have read on Somalia). They are also very resilient, and tired of their conflict - which is actually caused by a few spoilers.