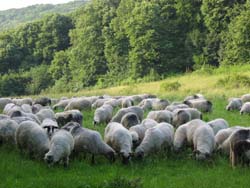 Fruska Gora is a mountain in Vojvodina, famous for its monasteries, beautiful nature and extensive network of hiking trails.

In Fruska Gora there are a lot of villages, pastures, lakes, orchards and vineyards. There are also around 20 monasteries, 17 of which are active. Some of the peaks offer great views over the Vojvodinian plain.

Accommodation is available in any of the several mountain lodges and smaller hotels. The village of Vrdnik is famous for its spa and hot springs, as well as an old crumbled tower of Vrdnicka kula.

Fruska Gora can best be seen on a daily excursion from Novi Sad, by one of the many regular bus lines connecting the city and the villages.

In ancient times, Fruska Gora was an island in the huge Panonian Sea, which covered the area of today's Panonian plain.

Fruska Gora was inhabited during the Roman Empire. The most well-known testimony of this period is probably the Vrdnik Tower, built by the Romans in 12th century.

In early 15th century, fleeing from the Turks, Serbian people inhabited Fruska Gora, founding numerous monasteries to guard the relics moved from the churches of Southern and Central Serbia. Around thirty monasteries existed at the time, 17 of which are still active, while others are in different stages of dilapidation.

A lot of villages are located in Fruska Gora today, so even if you find yourself lost in the woods, sooner or later you will surely bump into a road, a house or a human being. The nature is very tame and excellent for walking.

Getting to Fruska Gora

Fruska Gora is well connected with the rest of the country, with a number of important roads going over the mountain - as well as a railway line. The mountain itself is 60 km from Belgrade and approximately 10 km from Novi Sad. The old road connecting these two cities is passes through the town of Sremski Karlovci and eastern slopes of the mountain.

There is also a road from Novi Sad to Irig, a big village in the central part of the mountain, via Sremska Kamenica.

The easiest way to reach Fruska Gora is to hop on any of the numerous buses that link Novi Sad and the mountain villages. Buses operate all day, from morning till evening, and start from the main bus station (Bulevar Oslobodjenja) in Novi Sad.

In general, buses marked with two-digit numbers begining with 7 will take you to some place in Fruska Gora. The ticket is bought from the driver. Don't forget to tell him your final destination, since the ticket prices are different depending on the place you are going to.

Here are some examples:

You can take any train that stops in Sremski Karlovci to reach Fruska Gora from Belgrade or Novi Sad. You can use any of the trains operating between these cities except for the fast or business trains, which don’t stop in Sremski Karlovci.

What to see in Fruska Gora?

Fruska Gora is, among other things, convenient for hiking and picnicking. The longest trail, passing through the numerous villages and by almost all mountain lodges, is Fruska Gora marathon footpath. The marks can be seen on the trees, in shape of white circles with red heart in the center. If you stick to these signs, sooner or later you’ll get somewhere :)

Some say that monasteries are Fruska Gora's biggest attraction. They usually consist of several buildings surrounded by walls, with the church in the center. Here are some suggestions for the monasteries you might visit:

Vrdnik Monastery
The monastery is just on the right sight of the road entering Vrdnik from the direction of Novi Sad. It is dedicated to the Resurrection of the Christ. The complex consists of a church and three wings of monks' dormitories, surrounded by a wall. It was first mentioned in the written documents in the second half of the 17th century.  The Vrdnik Monassetry was destroyed and rebuilt several times. Today's facade was built in classical style. The interior was painted by the painter Dimitrije Avramovic, in mid-19th century. During the school year there is a regular daily bus from Novi Sad to Vrdnik. During the summer/winter vacation, there is no public transport available.

Novo Hopovo Monastery
It was built in 1576, as indicated by the inscription carved above the west door of the church. Wall frescoes were made in the mid-17th century, and iconostasis was painted by Teodor Kracun, one of the most important Serbian baroque painters. The famous scholar Dositej Obradovic lived in this monastery for some time. After the October Revolution, Russian nuns came and lived in this monastery until 1943, when it was deserted. It was restored after the World War II. You can reach the monastery from Iriski Venac or from the village of Irig - either way it takes about 40 minutes on foot. Nearby is the recently restored monastery of Staro Hopovo, which can be reached on a 30-minute walk from the Novo Hopovo Monastery.

Jazak Monastery
It was founded in the 16th century, but most of the buildings date from the 18th century, when an ample restoration took place. Baroque bell-tower was built in 1753. Iconostasis was made by painters Dimitrije Bacevic and Teodor Kracun. The relics of the Serbian emperor Uros, who ruled medieval Serbia in the 14th century, are kept in this monastery. The monastery was renovated after the World War II. It is located in the village of Jazak, about 10 km from Vrdnik.

Beocin Monastery
It is located nearby the town of Beocin, easily accessible by bus from Novi Sad. It is not know exactly when it was built, but it was first mentioned in the 16th century. The today's church was built in 1740 in Serbian-Byzantine style with gothic elements. The grave of the poet Jovan Grcic Milenko can be seen inside the monastic complex. The church was painted mostly by church painter Janko Halkozovic, and the engravings are made by Aksentije Markovic in the year 1791. There are a lot of daily buses connecting Novi Sad and Beocin, all starting from the main bus station in Novi Sad.

Ledinci Lake was located close to the village of Stari Ledinci, and was known as one of the most beautiful jewels of Fruska Gora. However, it has recently been bought by a mining company and turned into a stone quarry, despite the desperate attempts by the locals, ecologists and mountaineers to prevent the destruction of the lake. So the lake doesn't exist anymore.

Besenovacko Lake is located near the village of Besenovo. It is in a big cavity with sloping edges. You can reach the lake if you take the bus from Novi Sad to Beocin, than walk past the Beocin Monastery to Crveni Cot, and then descend in the same direction until you've reached the Besenovo Monastery, and finally the village where the lake is. It takes about an entire day to do this hiking excursion.

The best known picnic areas are Strazilovo (near Sremski Karlovci ), Testera (close to village of Cerevic) and Popovica.

Popovica is a picnic area with a little lake and a few mountain lodges: Zeleznicar, Orlovac, Penzioner, Medicinar. There is a direct bus linking Novi Sad and Popovica - the bus no. 74, departing from the main bus station in Novi Sad.

Iriski Venac is placed on the crossing of the roads Novi Sad - Ruma – Sabac and Cortanovci - Banstol - Crveni cot - Letenka - Vizic. It is 15 km from Novi Sad, and 68 km from Belgrade.  There is a restaurant, an old hotel, a petrol station and a couple of mini markets. If you've reached Iriski Venac on the road coming from Novi Sad, take the road branching off to the left and going slightly uphil, and after about 300 meters you'll arrive to the monument at Iriski Venac, dedicated to the soldiers of World War II. The monument is 40 m high and its base is a bas relief showing scenes from the war, from the occupation until the liberation.

Zmajevac is a picnic area on the road between Iriski Venac and Vrdnik. It takes about 30 minutes on foot to reach it from Vrdnik, and there is a nice vantage point from which you can see a big part of southern Vojvodina, some villages and lakes, as well as the Vrdnicka Kula tower. This place also offers wooden shelters from the rain, and places for making fire.

Glavica is picnic area only 9 km from Novi Sad. It can be reached by car, or a combination of bus to Sremska Kamenica + a 30 minutes walk. The lodge is always open, and offers basic accommodation. It is placed under the peak of Glavica (328 m).

There are not many caves in Fruska Gora, but real speleology enthusiasts will find some interesting options.

Grgurevacka Cave is located near Grgurevci village. The cave is very small; it consists of one small chamber which turns into a deep, vertical shaft that can't be explored without the proper equipment. In the lateral caves a great number of small stalactites and stalagmites can be seen. The colours are yellow and red.

If you take the road from Letenka to Rohalj Baze, after two kilometers you will see a small hunters' lodge on your left. Just before the lodge there is a dirt road leading to the left, downhill toward the village of Grgurevci. The road leads around a small peak and reaches an old quarry. And there, on your left, is the entrance to the cave.

Perina Cave is located in Popovica. It is believed to be an old, abandoned mine. The entrance to the cave is a relatively small hole hidden in a shallow cavity. It is usually covered with branches, leaves and stones. After the entrance the cavegets wider and after only few meters the ceiling becomes significantly higher - around 120 cm. The cave can be reached if you take the forest path from Ledinci to Popovica, and then take the hardly visible path on your right (if you are going in the direction of Popovica). Follow that path for about 5 minutes, and you'll arrive to the small cavity where the entrance is. This cave is not easy to find, so you might need to ask the local people - on a nice day there should be plenty of shepherds as well as hikers in this area - how to reach "Perina Pecina".