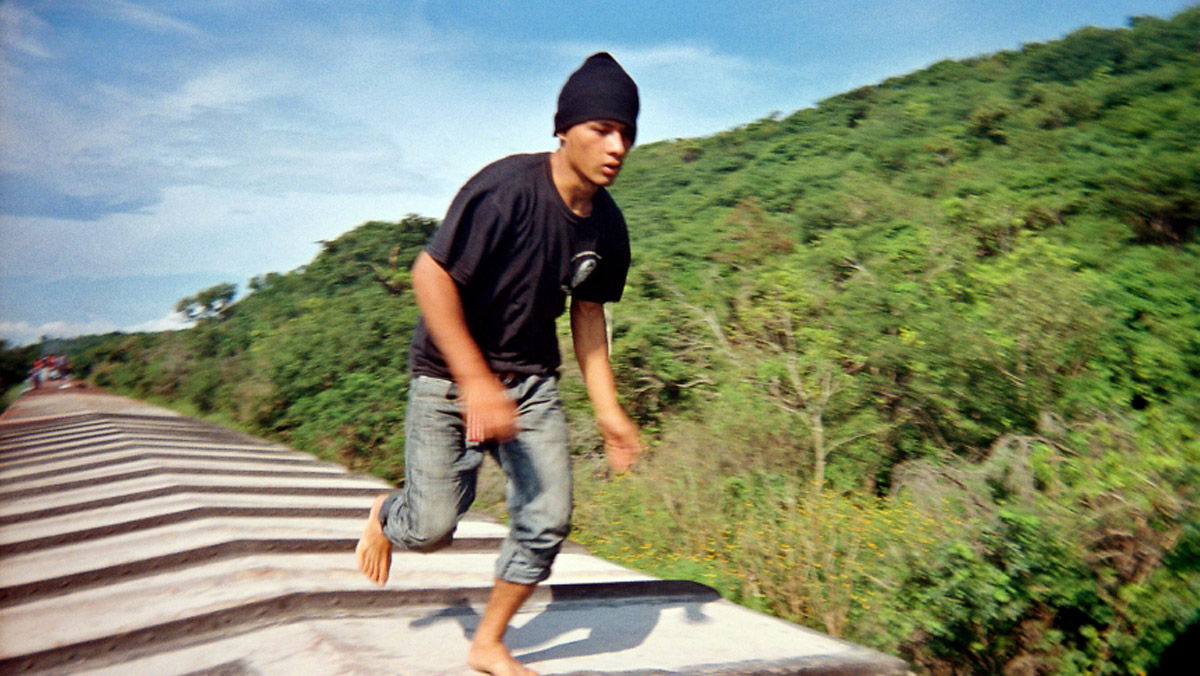 "It's just crazy to see this guy barefoot," says Pindado. "The tops of the trains are so hot. At the same time, he's wearing a hat. The temperatures drop at night, especially up north. You can also see that the train is moving and that he's jumping. There's so much risk during the journey." 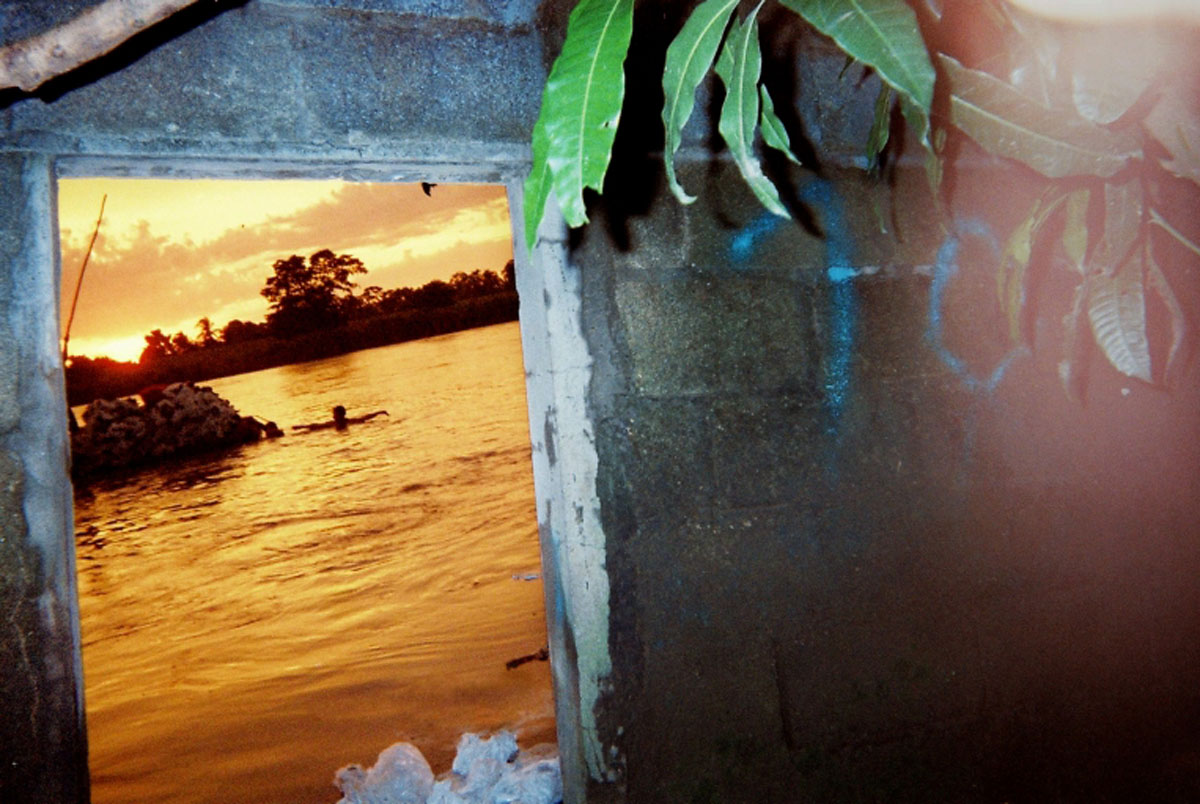 "A lanchero took this photo," says Pindado. "A lanchero is someone who runs the small boats carrying everything from food to people, and the guy who took this works along the river that runs along the Guatemala-Mexico border. A lot of lancheros can be stigmatized, just like the migrants, and treated like they're part of a criminal gang. I don't think they are. I believe they're people trying to support their families just like the migrants. I believe this photo was taken from an abandoned house. We see a person carrying a lancha, a boat, filled with cargo, dragging it all along with a stick." 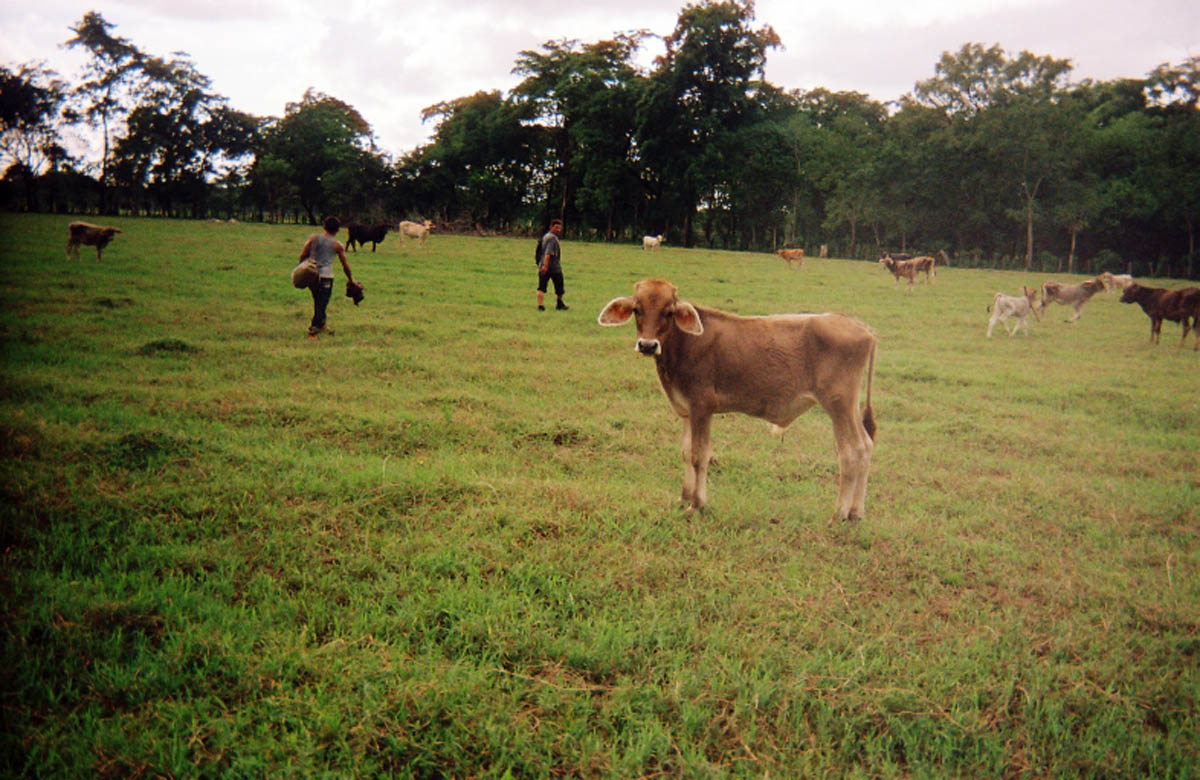 This field in southern Mexico is frequented by migrants heading north. "There are a lot of Mexican migration checkpoints along the road, so migrants bypass them as they head to where they catch cargo trains," says Pindado. "This particular area of Mexico is notoriously dangerous for migrants, especially for women who can get raped or wrapped up in the sex trade along the way." 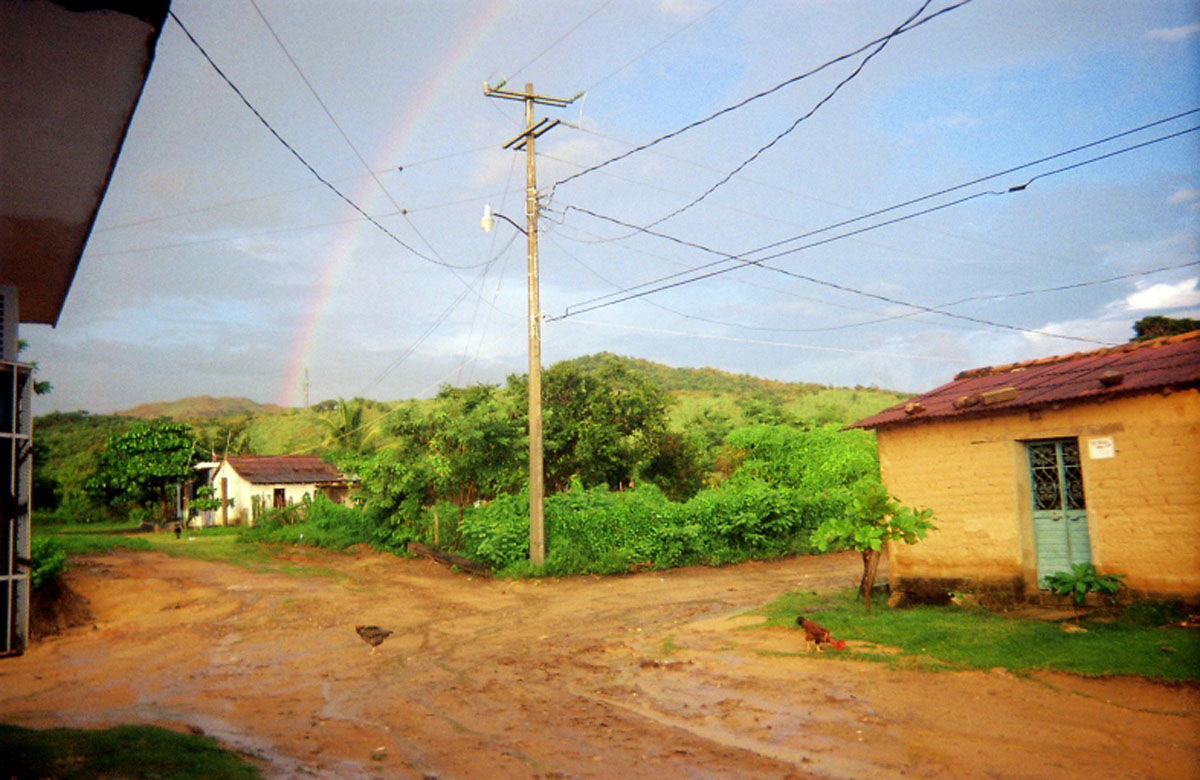 A small village in southern Mexico. "A peaceful scene, but we don't know if the migrant who took this shot spent the night in this town or just passed through," says Pindado. "It's not unusual for people in small Mexican towns to offer migrants food and shelter. It can mean some income, allowing someone to crash in the back of their house for 30 pesos." 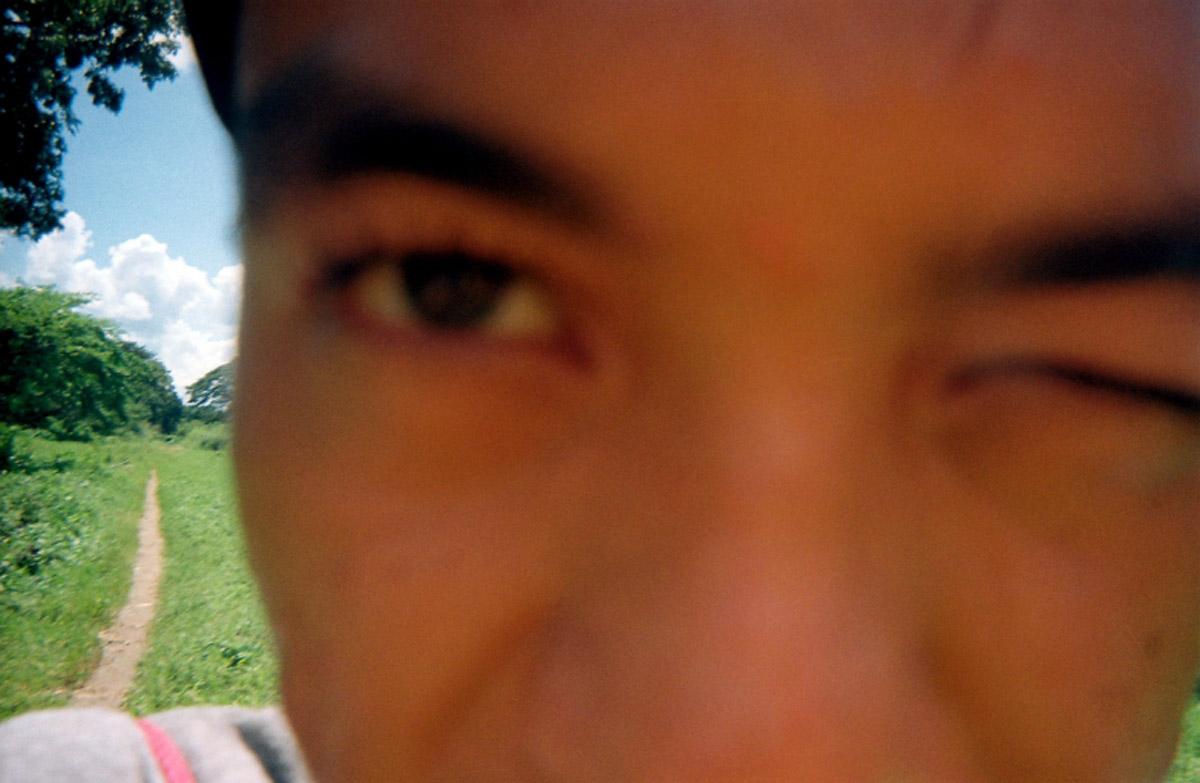 "We found out that this kid was 13 years old traveling with his older brother, who'd made the trip to the United States before. They were both from Honduras," says Pindado. "We later found out that his brother was pushed off the train because he didn't have money to give a criminal gang. We're told that the gang robbed the migrants, asking for $100 each. The older brother was on top of the moving train and they pushed him off. We don't know what happened to his little brother, the kid in this picture." 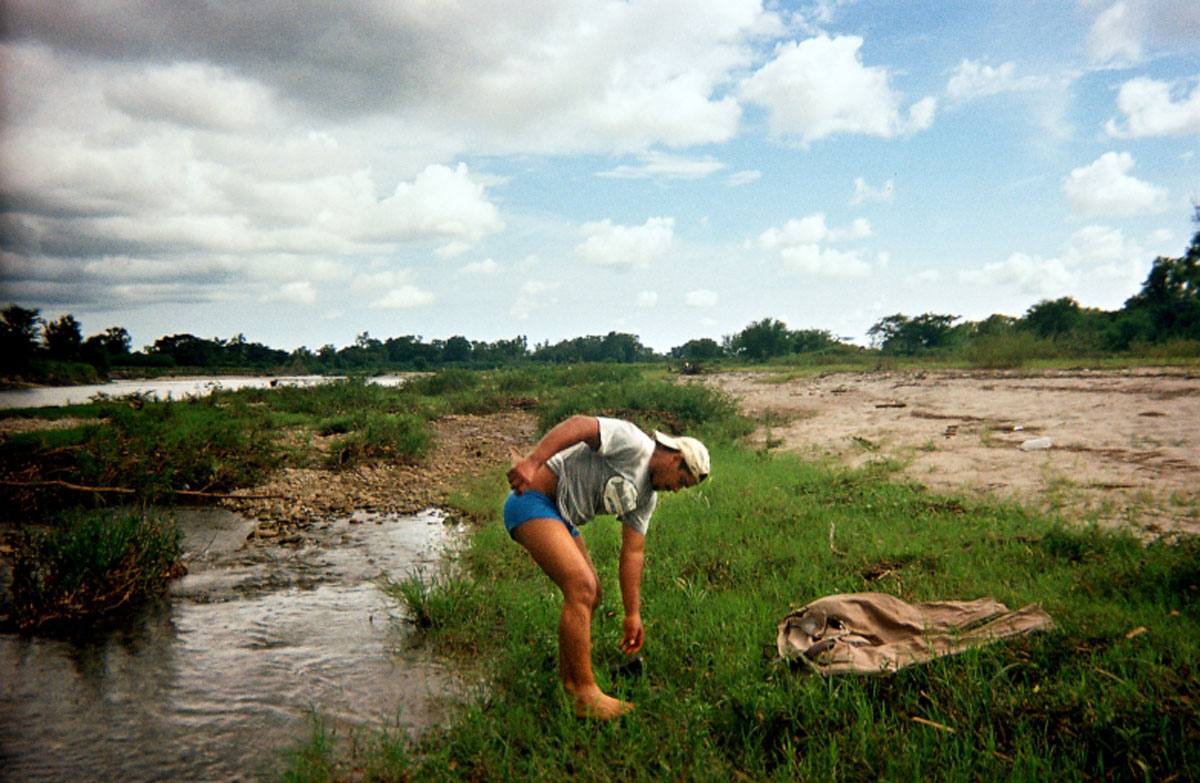 "We don't know where this photo was taken," says Pindado, "but it just shows one of these moments when migrants stop and clean up by a river. I love the sky in this photo. I imagine it had just rained." 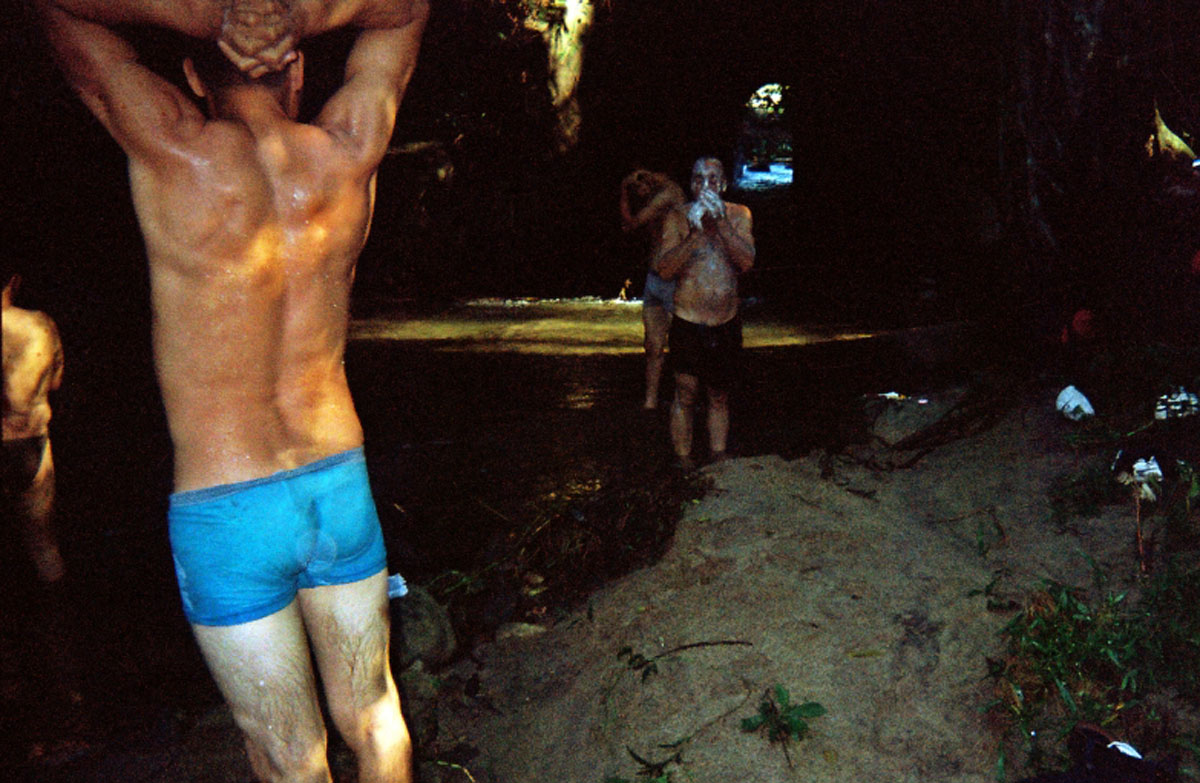 "It almost looks like a vacation photo, but what we are seeing here are men washing up as they make their way to the States. We know that it was taken at some point between the border and Arriaga, Chiapas," says Pindado. 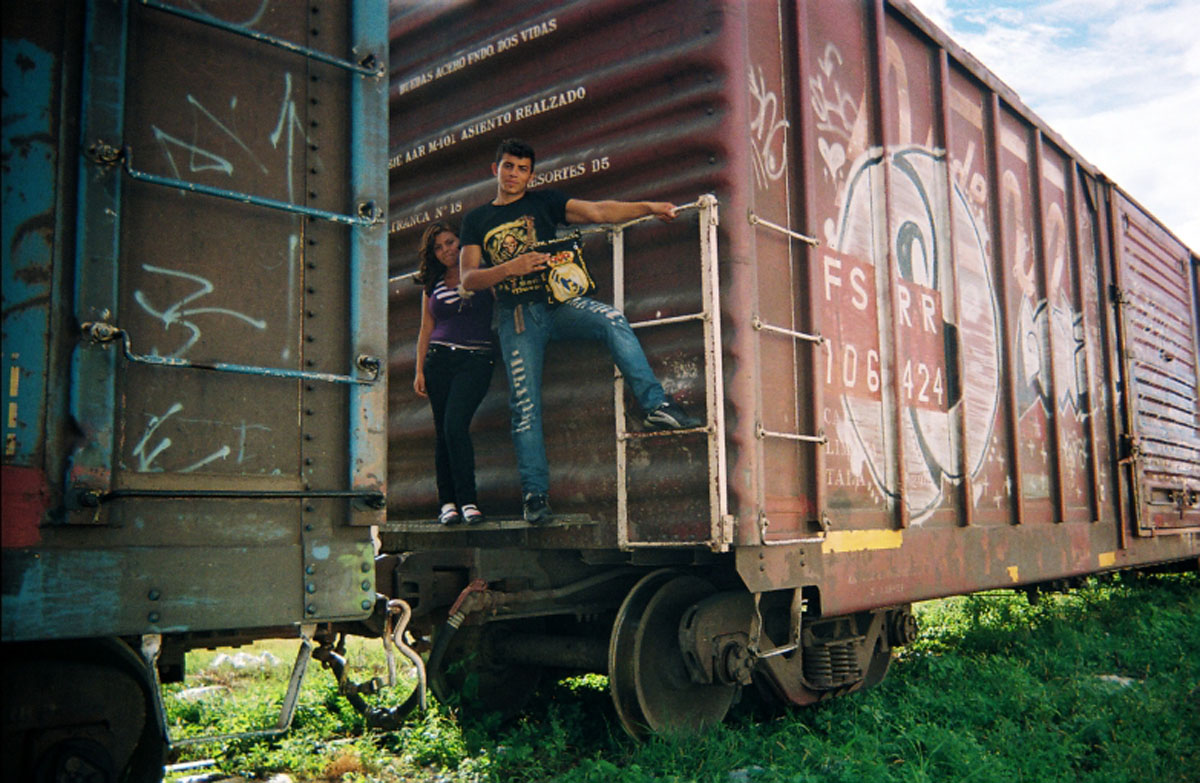 "This photo was taken by a volunteer at a church-run migrants shelter," says Pindado. "We don't know much about the two people in this photo, whether they are a couple or not. It's true, though, that if you're a migrant women traveling alone through Mexico, it's a good idea to find a companion along the way. Many women get raped." 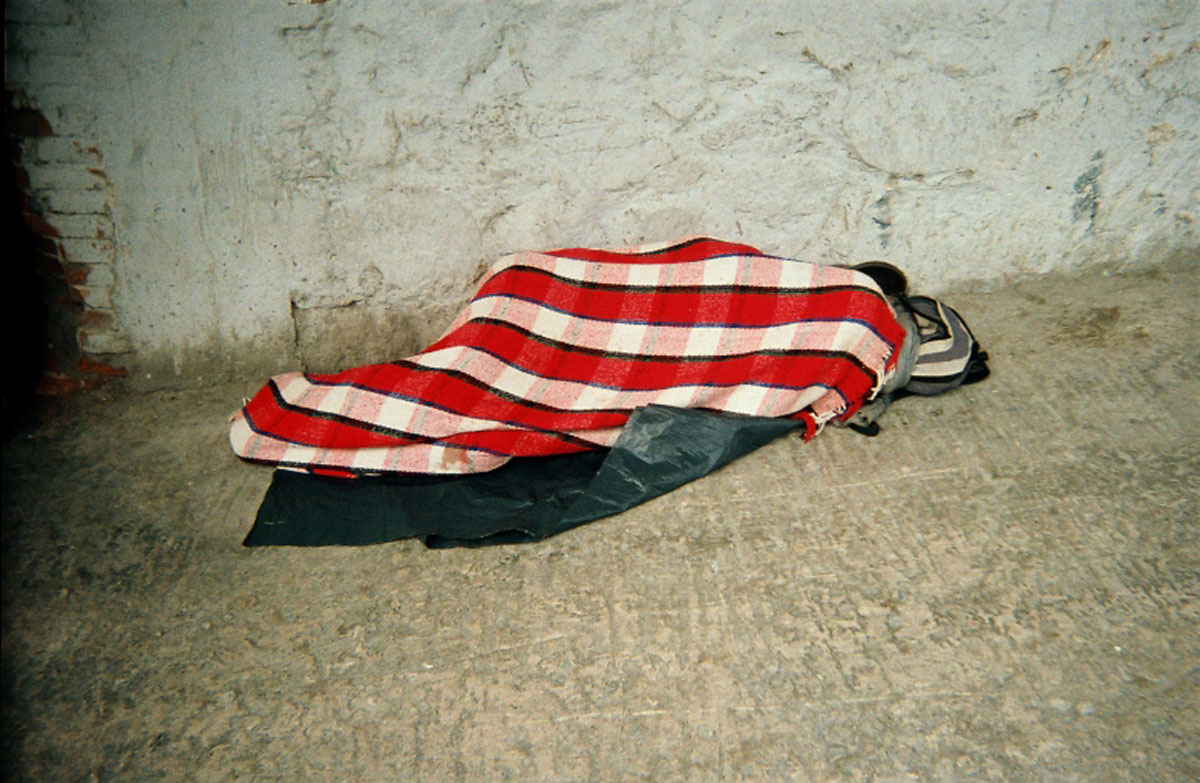 "This photo was taken by a member of a local community who works to aid migrants in Mexico," says Pindado. "Here's this migrant, sleeping outdoors, exhausted." 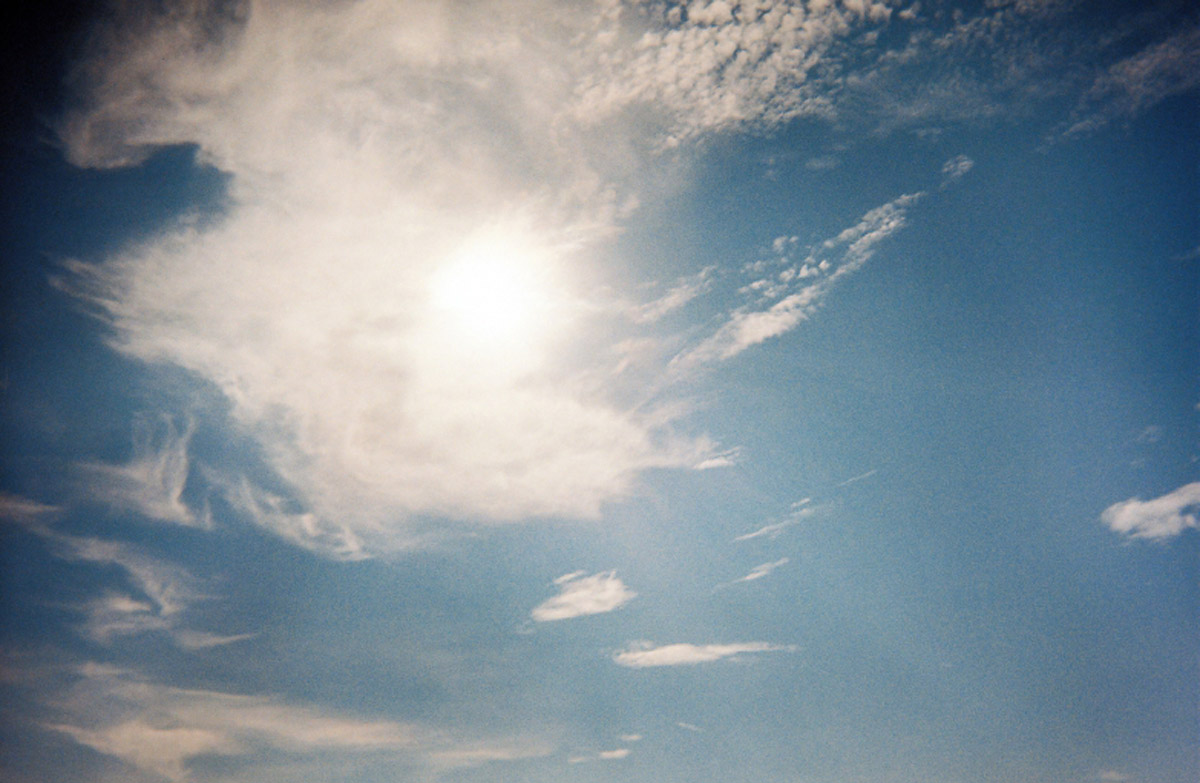 "I imagine whoever took this photo was jumping into the sky, dreaming and hoping. That's what migrating is about," says Pindado. "Or maybe the person who took it was praying. So many times, when you ask migrants about the risks along the way, they say, 'I'm protected by god.'" 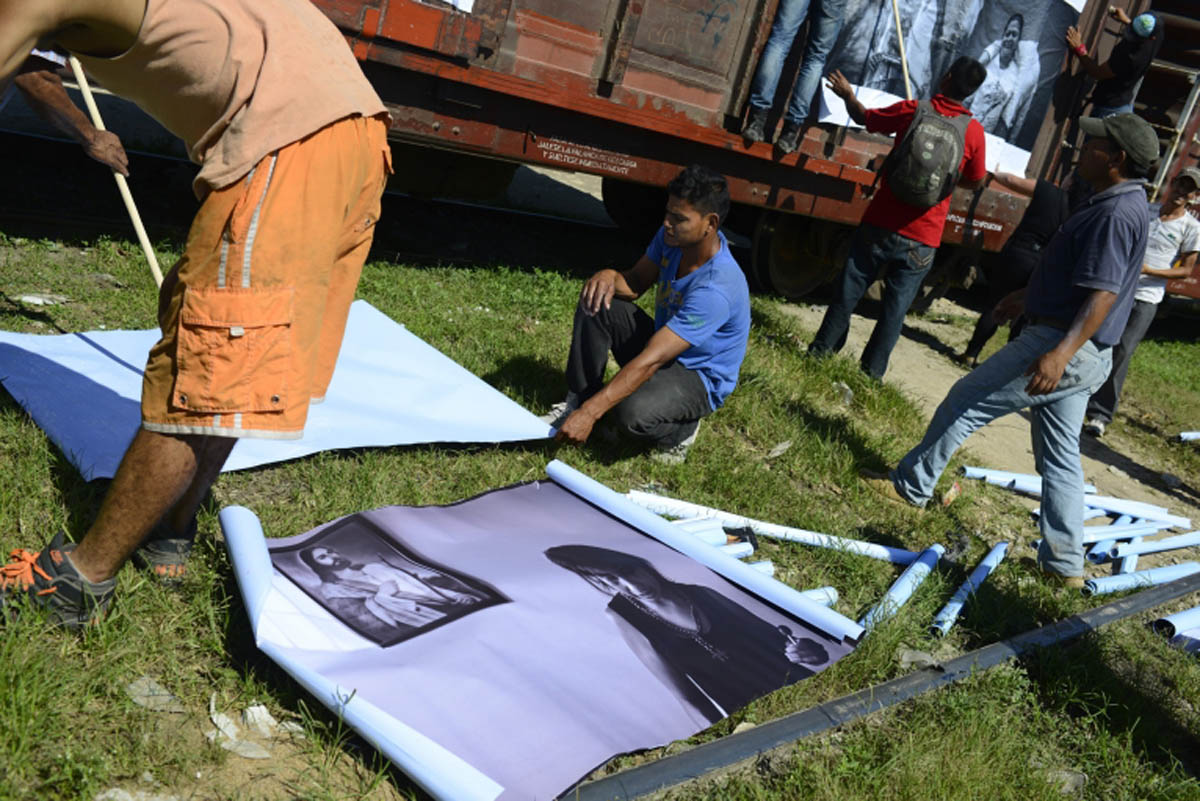 A MigraZoom participant, a young migrant, familiarizes himself with a disposable camera. 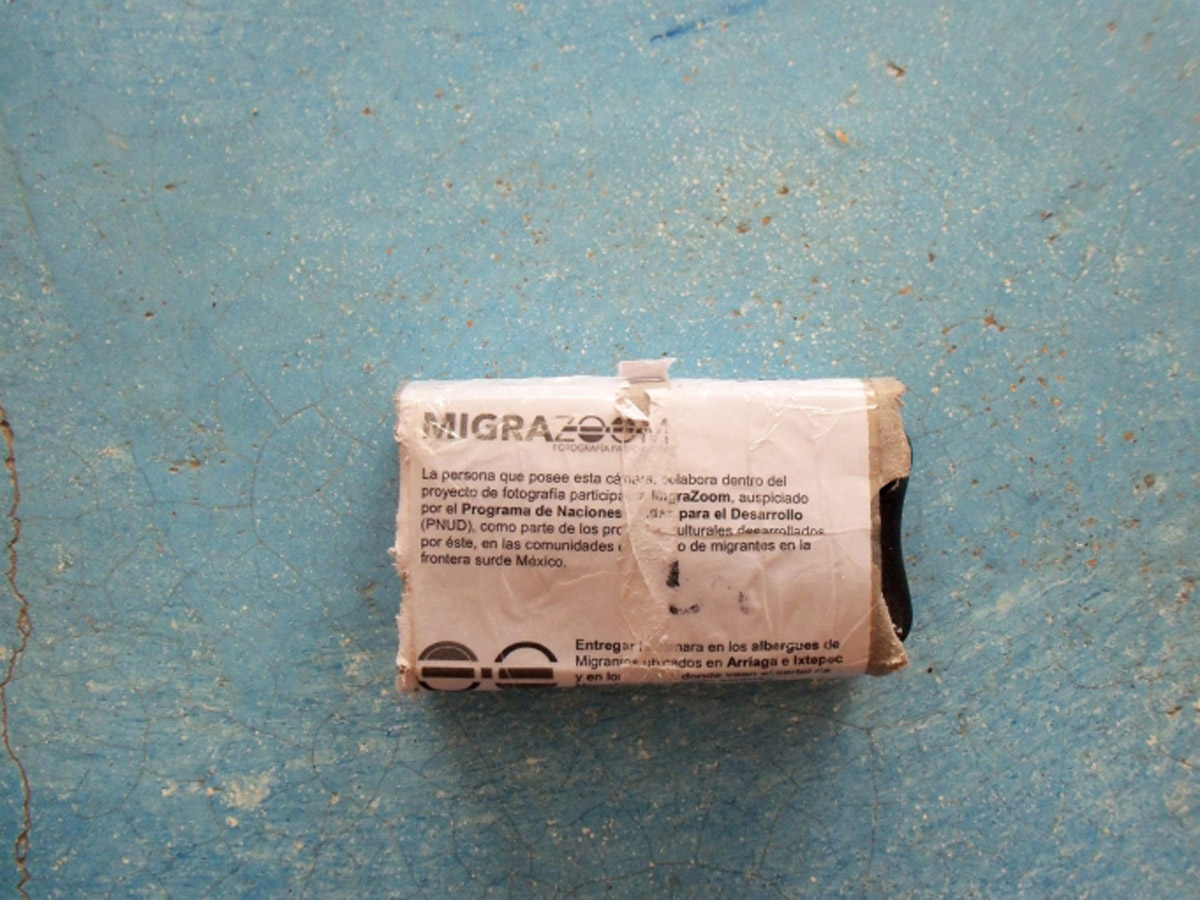 Cameras distributed to MigraZoom participants included a description of the photo project and security protocols. "We told everyone using the cameras, 'Remember, this is just a camera. Don't take pictures of people you don't know, and if anyone asks for the camera, just give it away,'" Pindado said. "We wanted to make sure that the camera would never put them in danger." 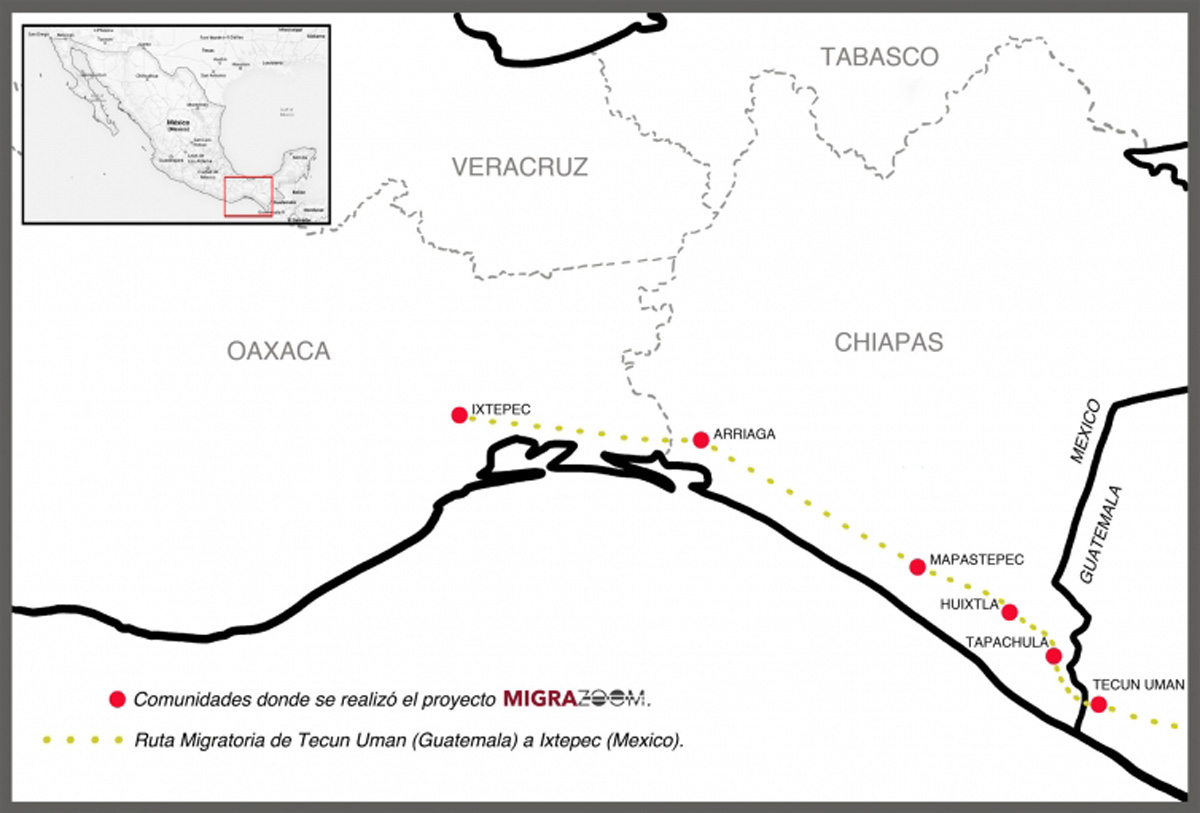 A map of southern Mexico, created by photographer and MigraZoom participant Fabio Cuttica. It details typical migrant routes, where many of the MigraZoom photographs were shot.

After years of documenting migration in Mexico, Spanish-born photographer Encarni Pindado began a new project that handed the equipment — disposable Kodak cameras — to the migrants themselves and people who interact with them along the way.

"We've seen photos of the journey migrants take through Mexico, and I'd been on the trains with them as they made their way to the border," Pindado said. "But I also knew that something was missing, that there were moments that we were still not capturing."

MigraZoom launched in early 2013, supported by a grant from the United Nations Development Program.

Pindado, collaborating with other Mexico-based photographers, headed to Mexico's southern border with Guatemala. There, Central American youth tend to congregate and regroup to continue their journey north.

The MigraZoom team handed out about 200 Kodak cameras and gave a quick photo workshop. They also told the migrants they would move up the usual migrant path, too, following the railroad lines, and gather the cameras along the way.

In the end, MigraZoom collected about 70 percent of the cameras they gave out. In return, they made prints for the participants to keep.

On the top is a selection of photos taken by migrants, with observations from Pindado. The names of the photographers are omitted to protect their identity, as many have likely crossed the US-Mexico border without documentation.

The article originally published on www.pri.org. 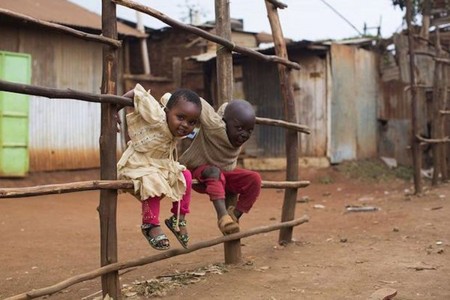