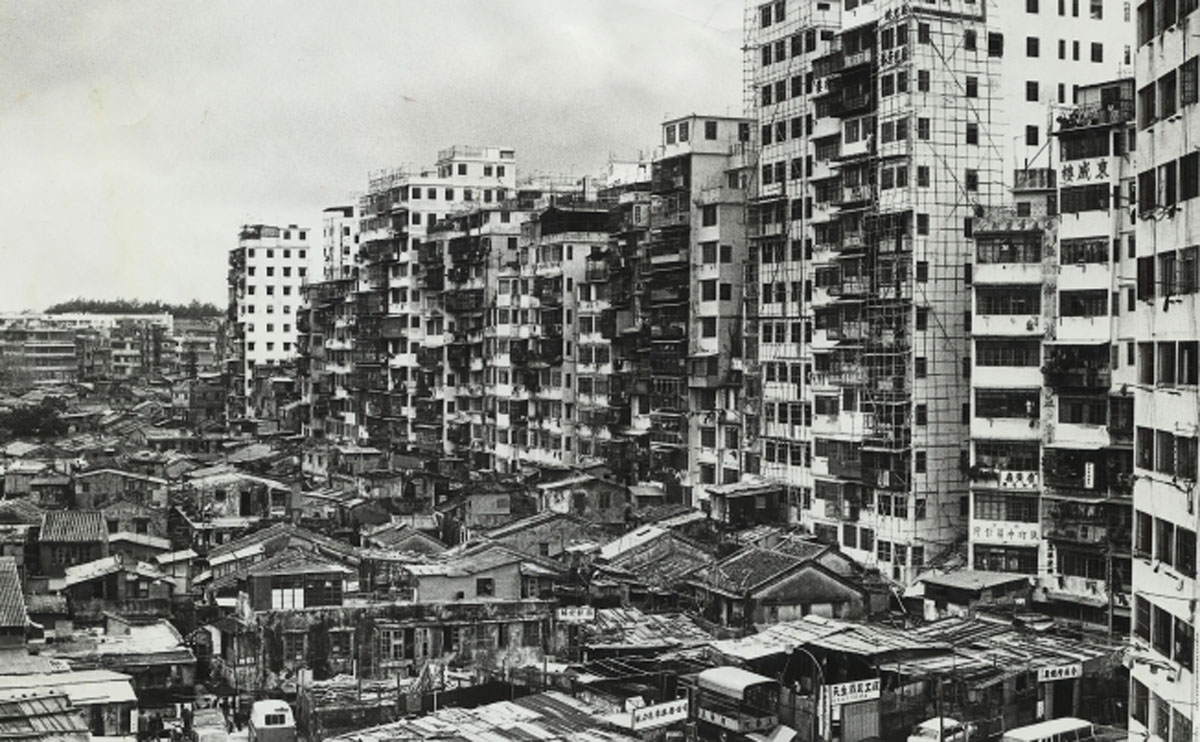 This picture, taken in the 1970s, shows the squatter village in front of the walled city which was 2.63 hectares of tightly packed dilapidated buildings without water supply or garbage-collection service and with minimal police patrol. 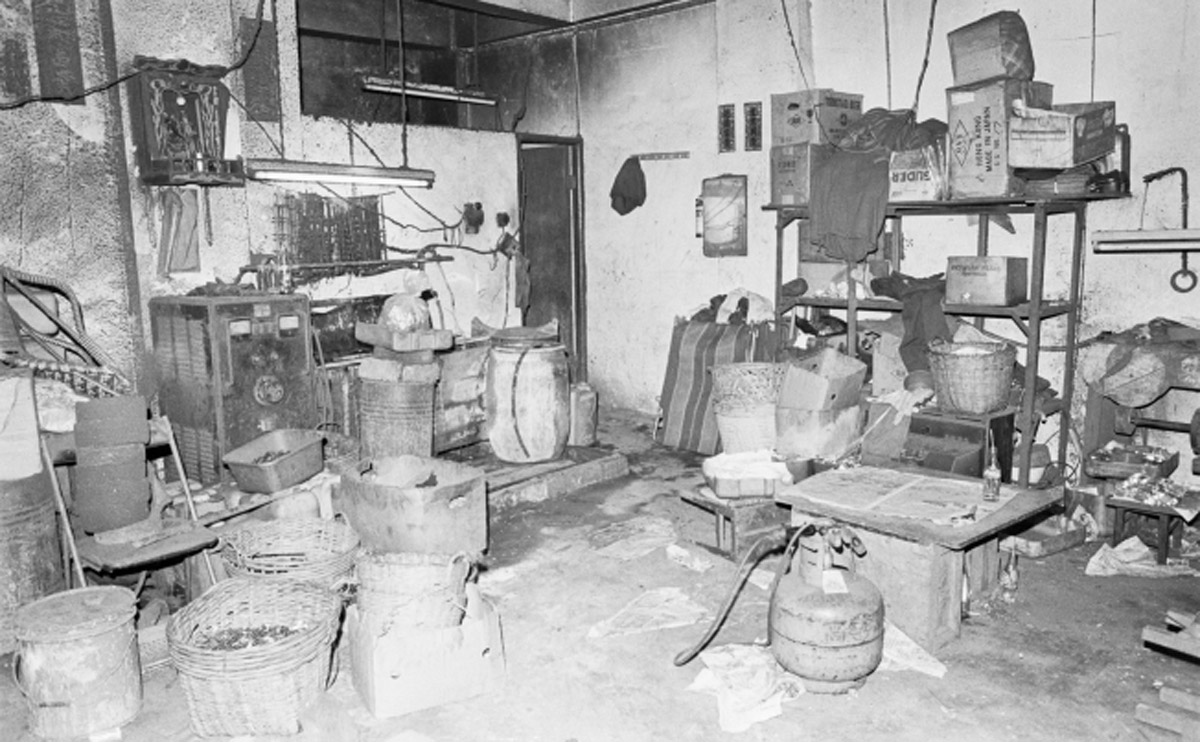 Notorious for drugs and crime, residents of Kowloon Walled City endured dangerous living conditions with 50,000 people crammed into only a few blocks. 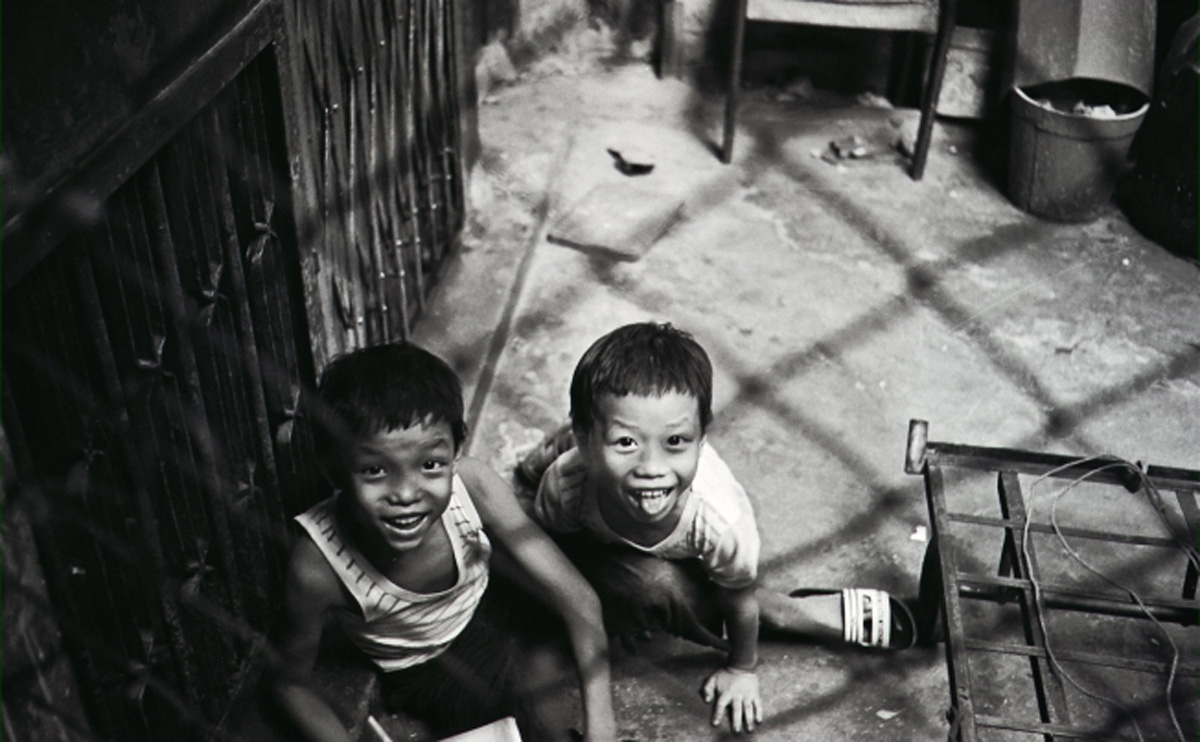 Children living in the walled city would go to the roof and fly kites that could almost scrape the bellies of airliners as they descended to the old Kai Tak airport across the street. 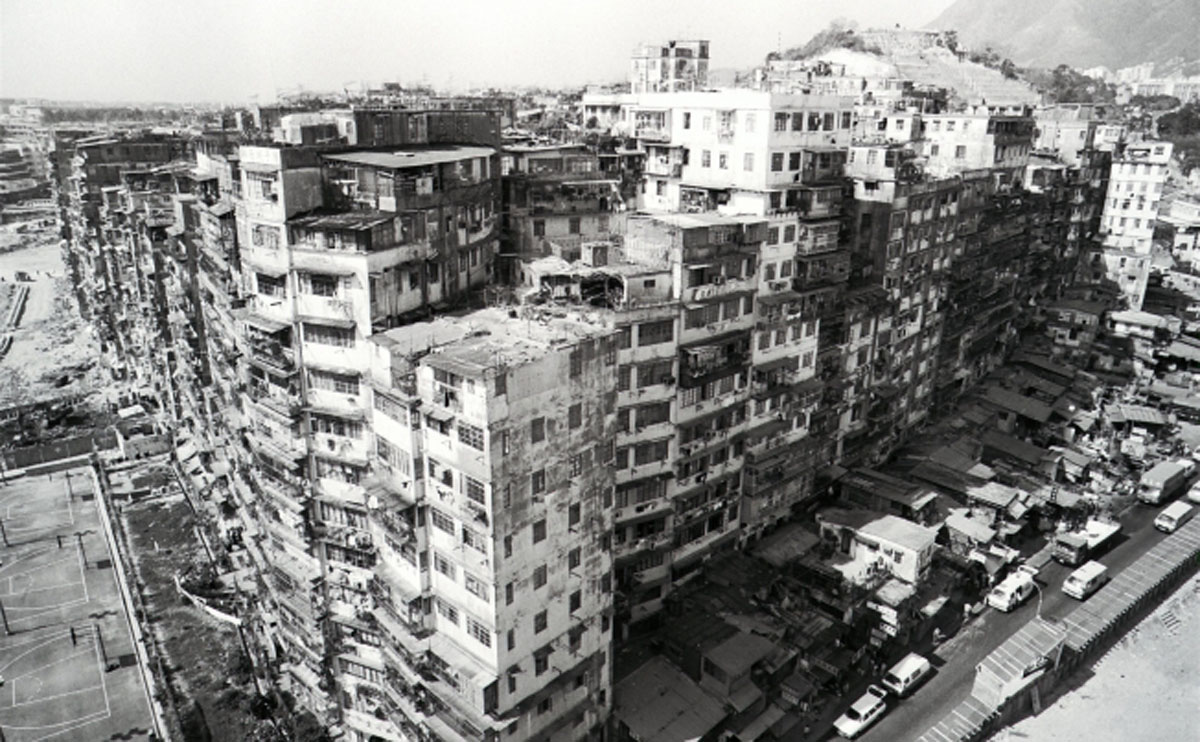 The city was a phenomenon with 33,000 families and businesses living in more than 300 interconnected high-rise buildings, all constructed without contributions from a single architect. 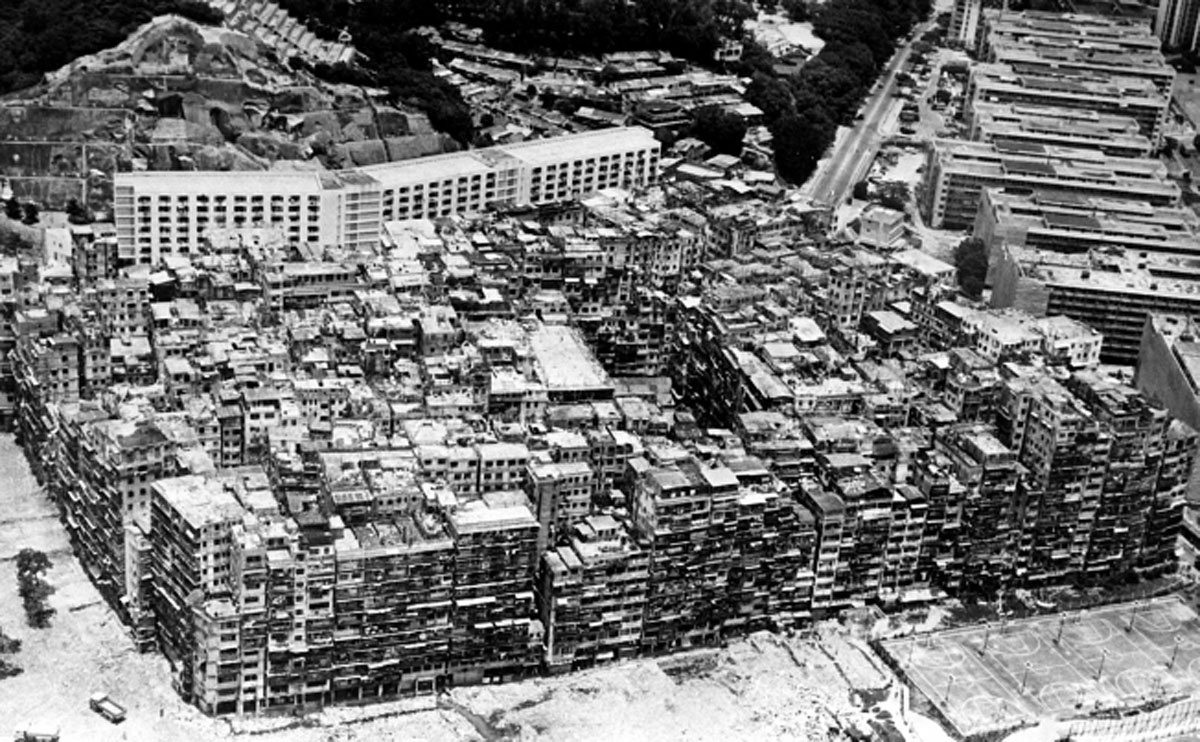 The walled city fell through a constitutional loophole in 1899 and was governed by neither the British, Chinese or Hong Kong authorities, allowing the enclave to fester into a hotbed of vice with rampant drug use, prostitution and gambling activities. 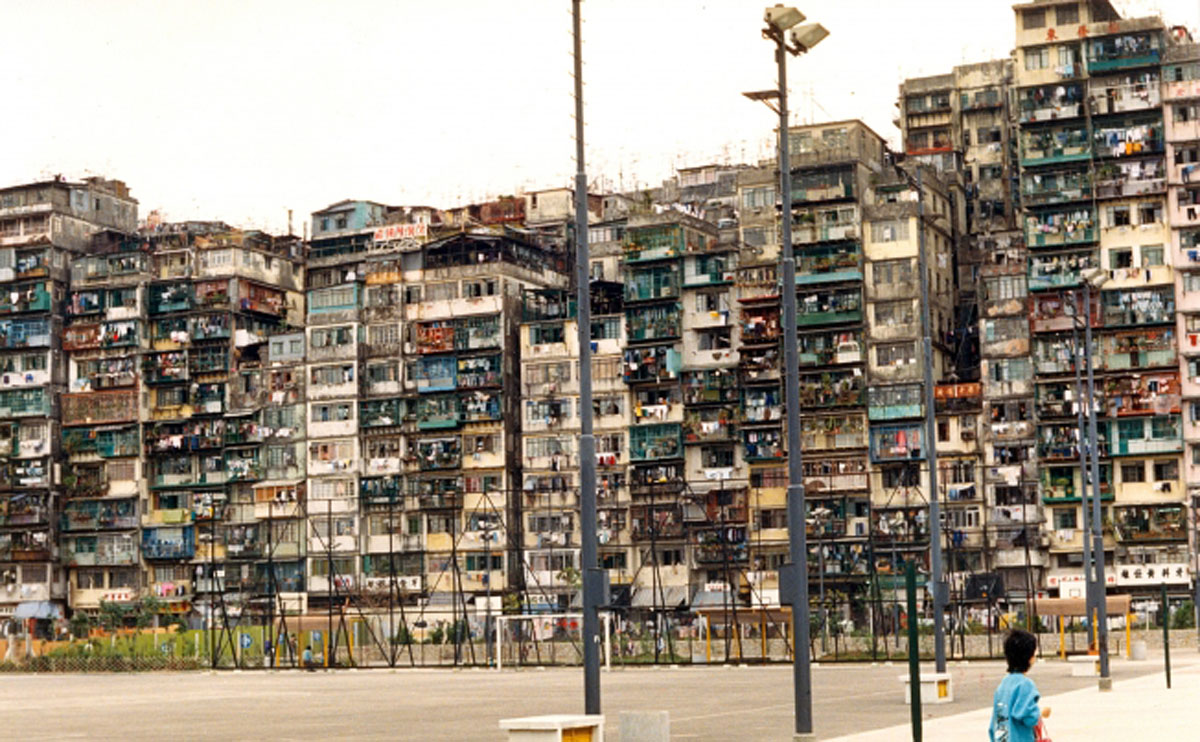 A misconception is that the walled city was home of the poorest. In fact, all walks of life lived there. 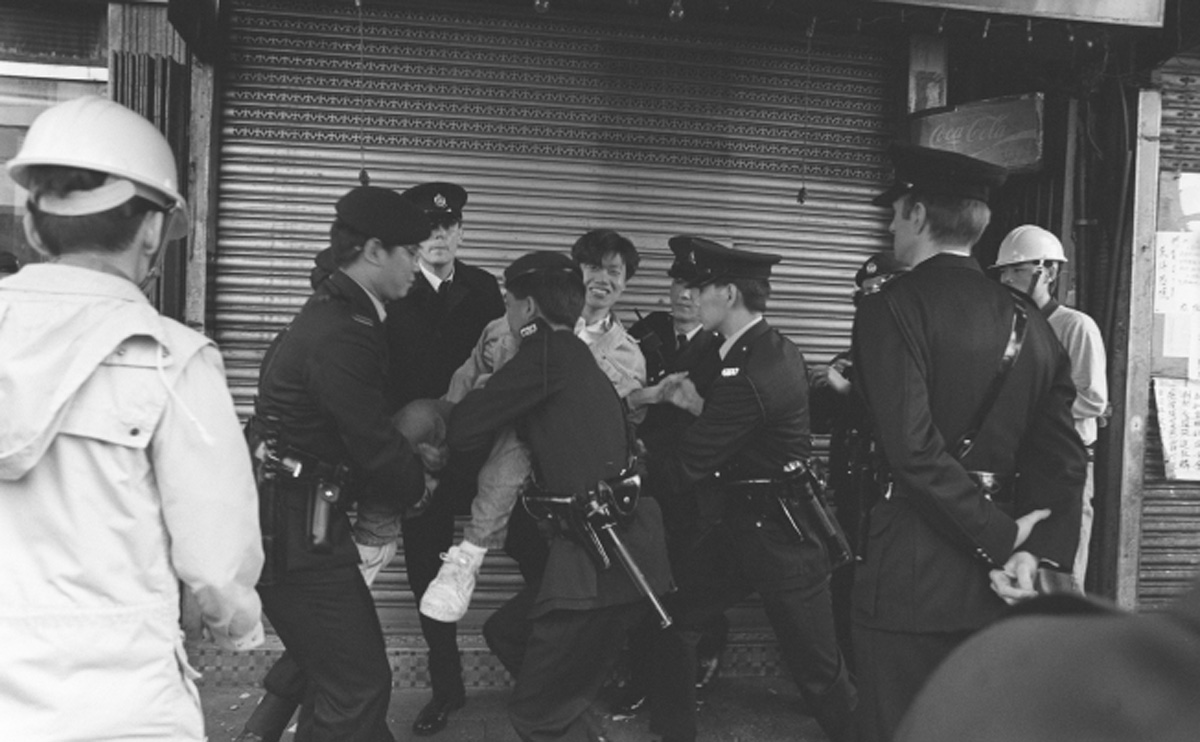 A young resident of the Kowloon Walled City is being forcibly evicted by police at a clearance operation. The Sino-British Joint Declaration in 1984 laid the groundwork for the City's demolition and evictions began in 1993. 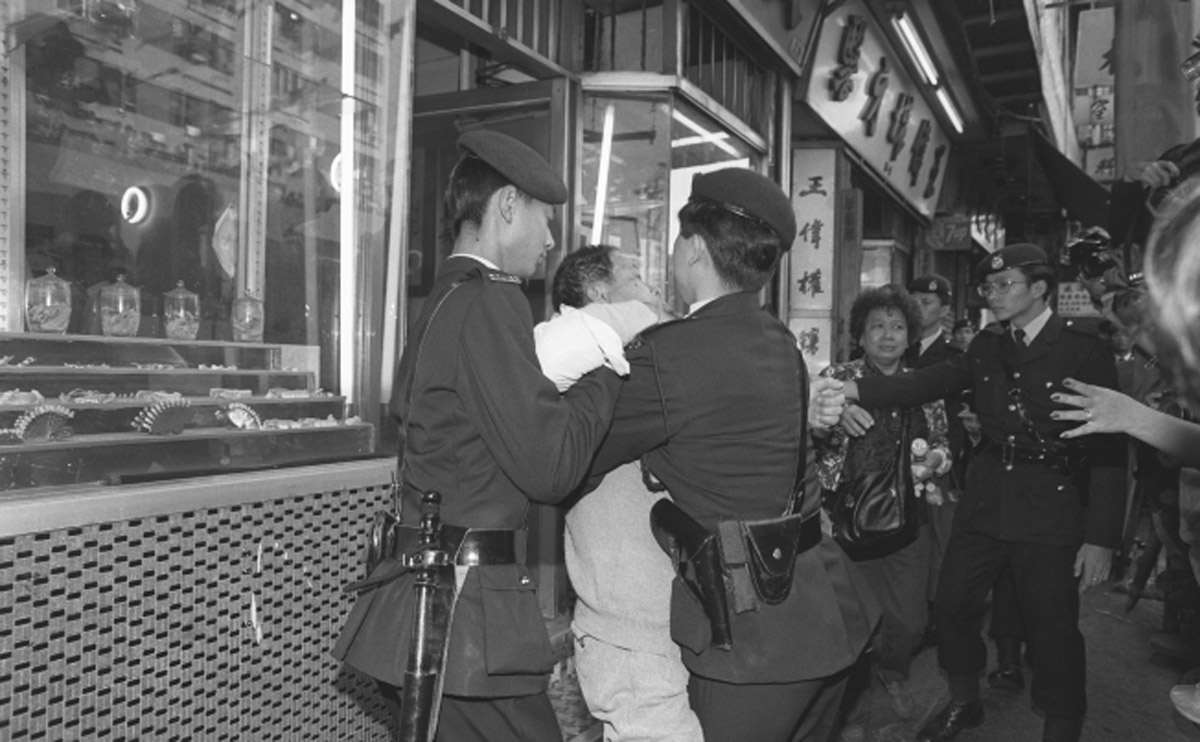 Some residents were not satisfied with the compensation they were offered when the decision was made to tear down the city, and were forcibly evicted between November 1991 and July 1992. Here, policemen trying to control a defiant resident of the Kowloon Walled City during an eviction operation. 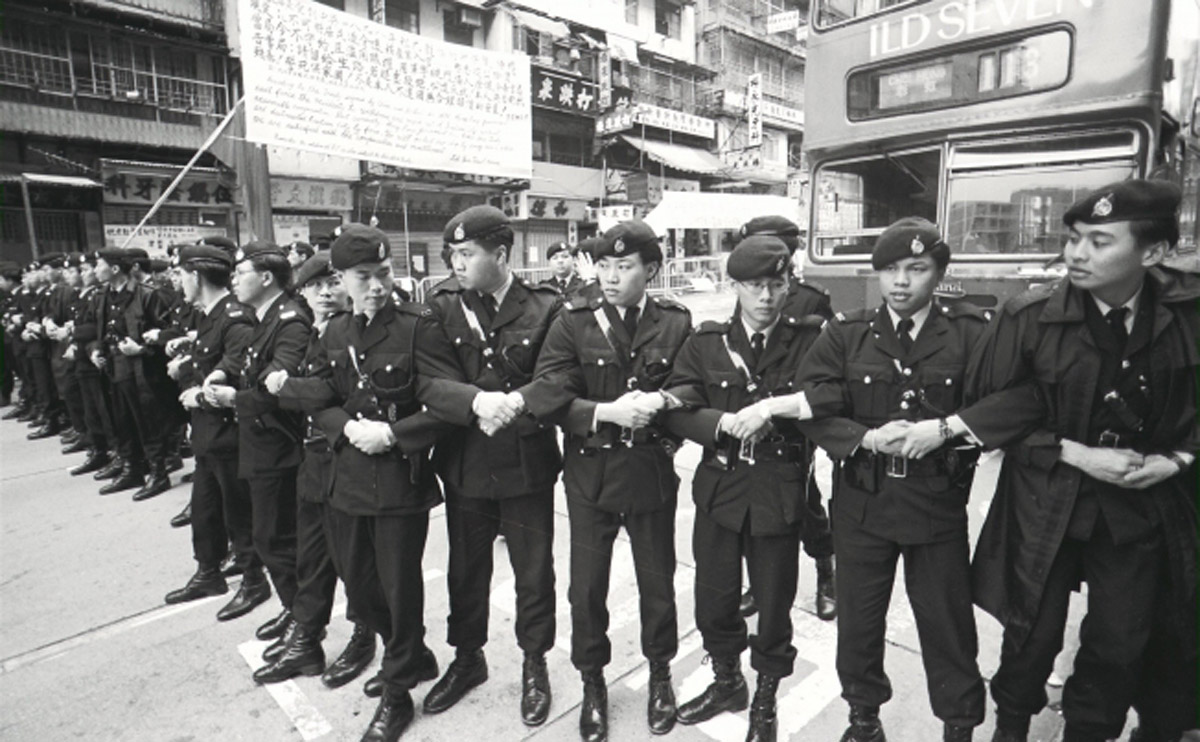 Policemen form a human barricade during an eviction of residents from the Kowloon Walled City. 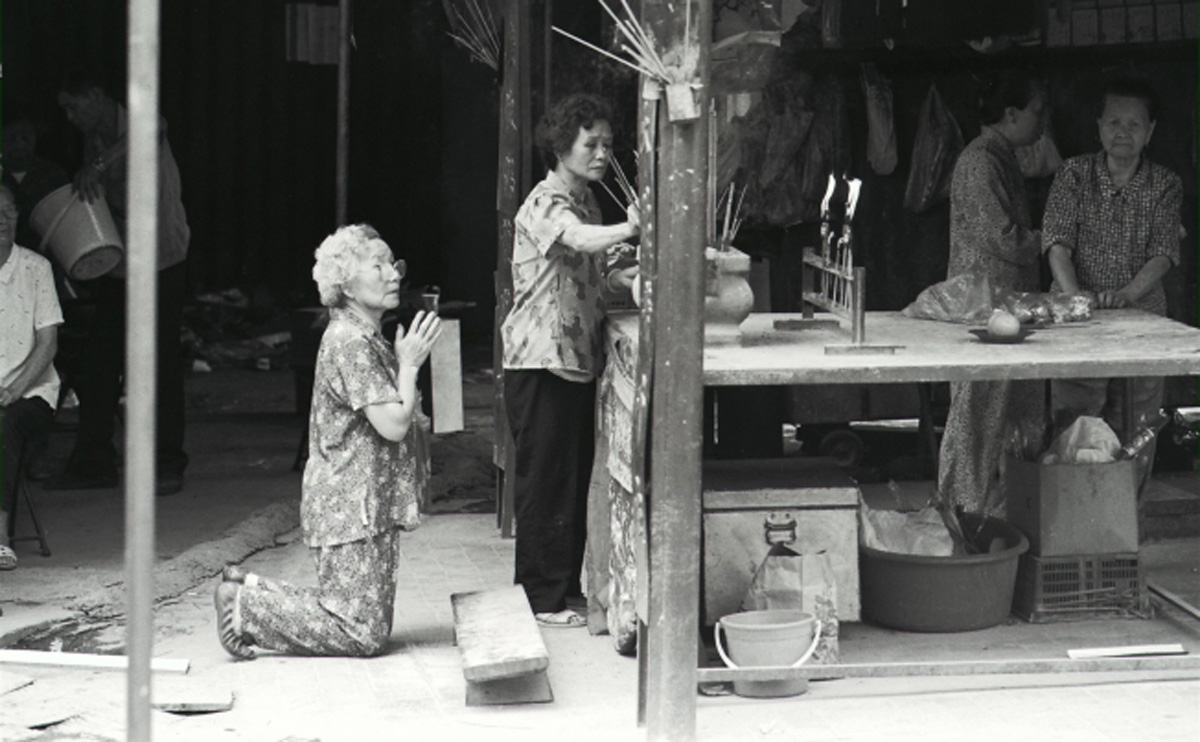 Elderly residents of the Kowloon Walled City spare a little time to worship near their homes during the final clearance operation of the Walled City. 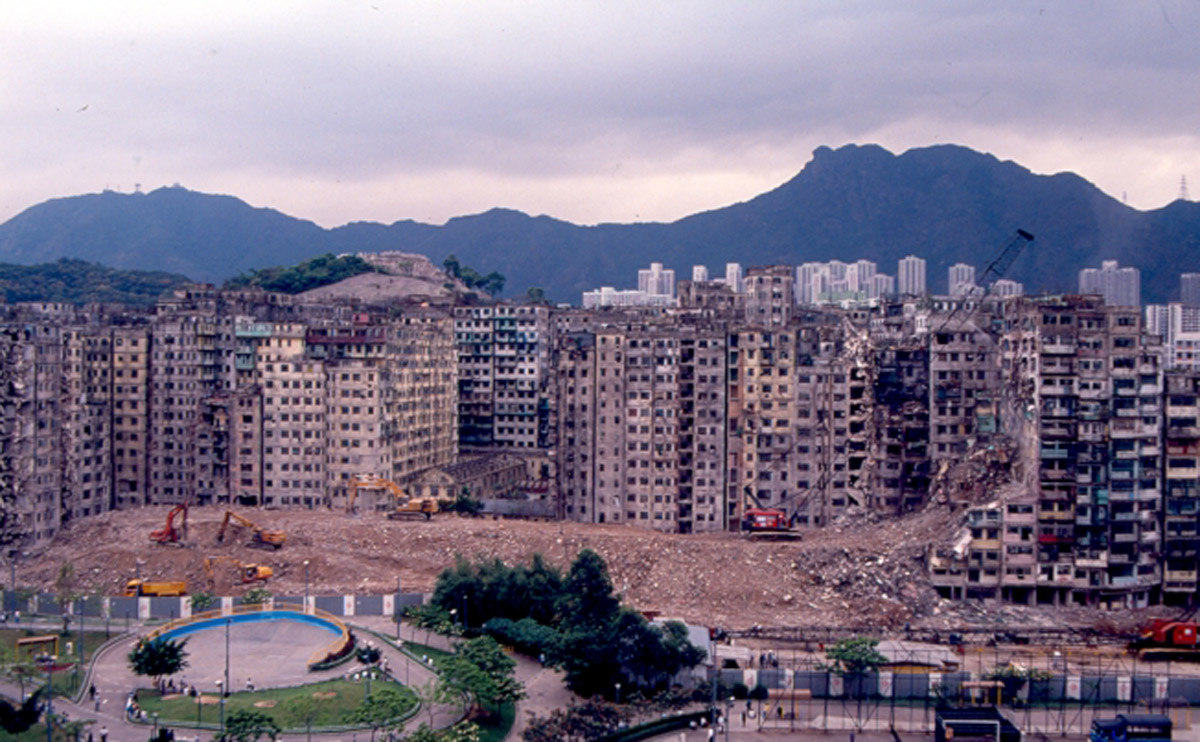 Kowloon Walled City during the 1993 demolition with Lion Rock at the background. 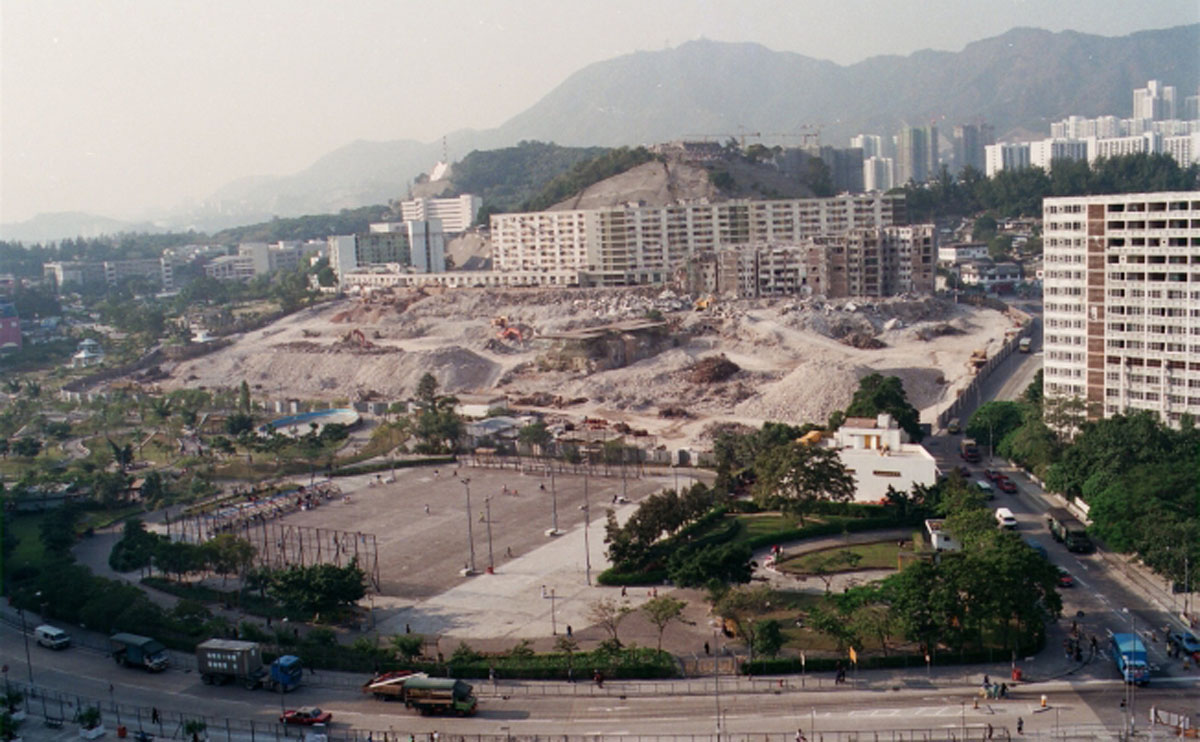 A bird's eye view of the Kowloon Walled City during demolition.

A 2.7-hectare enclave of opium parlours, whorehouses and gambling dens run by triads, it was a place where police, health inspectors and even tax collectors feared to tread. In Cantonese, it was known as the City of Darkness.

But though it may have been a fetid slum, crawling with rats and dripping with sewage, it was stoutly defended to the last by those who lived there, as well as an unlikely ensemble of Chinese shopkeepers, faith healers and self-taught dentists. It was once thought to be the most densely populated place on earth, with 35,000 people crammed into a few tiny apartment blocks and more than 300 interconnected high-rise buildings, all constructed without contributions from a single architect.

But in March 1993, the last batch of residents finally accepted the government's rehousing terms and compensation terms. It brought down the final curtain on a bizarre chapter of Hong Kong's colonial past. Ask former residents what they miss most about the Walled City and most say the friendship.

In the 1960s, the Heung family of six moved from a rooftop hut in Hung Hom to the Walled City.

At first they lived in a 70 sq ft room in a two-storey house near Tung Tau Chuen Road, which they shared with seven other families. Several years later they moved to a two-bedroom flat on the fourth floor of a high-rise on Tai Cheng Street.

"Life was poor, but we were very happy," said Heung Yin-king, the eldest daughter.

"We had the best times in the first house, even though the rooms were so tiny there wasn't space for a dinner table.

"We ate from a board laid over the knitting machine and sat on the bed. Everyone got along, and it was great to have so many kids to play with.

"The second house was all right but had no taps, so as the eldest daughter I had the responsibility of hauling buckets of water from the public taps up four floors to the flat every day. That's why I'm so short!"

The history of the Kowloon Walled City dates from the Sung Dynasty of 960-1297, when it began as a small fort to house the imperial soldiers who controlled the salt trade. In the second half of the 19th century, the Chinese were facing invasion by the British, who held Hong Kong Island. So they expanded it into a proper garrison town containing soldiers, officials and their families.

In 1898, it became the only part of Hong Kong that China was unwilling to cede to Britain under the 99-year lease of Kowloon and the New Territories. The British agreed that China could keep the Walled City until the colonial administration for the area was established. But China never dropped its claim of jurisdiction and the sovereignty fight remained unresolved. The result was that it became a lawless enclave and a hotbed of criminal activity.

In December 1899, after several unsuccessful attempts to clear the city, the British announced their jurisdiction was to be extended to include it and the Chinese officials left. The city became isolated. While parts were leased to church-run, charitable institutions, much was left to fall into disrepair. By 1940 only the Lung Chun School, its gateway and one private home remained.

When the Japanese invaded in the second world war, they demolished the oldest standing part of the Walled City - its wall, used in work on Kai Tak airport. But the destruction didn't prevent Chinese refugees flocking to the site after the war. Rents were low, and there were no concerns about taxes, visas or licences. By 1947 there were 2,000 squatter camps on the site. Permanent buildings followed, and by 1971, 10,000 people occupied 2,185 dwellings.

By the late 1980s, it was home to 35,000 people. The government tried to clear the city several times, but on each occasion the residents threatened to create a diplomatic incident. Their attitude - handy when it came to keeping the noses of the authorities out of their business - was that the city was part of China and would never belong to Hong Kong. And to avoid damaging Sino-British relations, the government adopted a largely hands-off policy towards it. The city again became a hotbed of criminal activity. Opium dens, heroin stands, brothels and dog restaurants all multiplied in the '50s and '60s, with police usually turning a blind eye. There were three reasons for that - the police were politically hamstrung, some were bribed and it was too dangerous. Real power lay with the triads. But the position changed in the '70s, when a wave of anti-corruption campaigns removed most criminal elements in the authorities. No longer protected, the triads became weaker.

The height of the Walled City rose with the rest of Hong Kong. In the 1950s, housing usually consisted of wooden and stone low-rises. In the '60s, concrete buildings of four or five storeys appeared. And in the '70s, many were replaced by blocks of 10 storeys or more. The site became chaotically cramped, with buildings so close to each other that in some it was impossible to open a window. Low rents also meant many small factories, with toys, plastic goods and food among the biggest products. The factories may have brought their owners decent incomes, but they also brought more rubbish, fire hazards and pollution to the city. Limited interference by the authorities also meant limited welfare. Apart from basic municipal services such as rubbish collection, residents had to rely on each other to maintain living conditions. That bred a close-knit community of people willing to support each other.

The Walled City's fate was finally decided in January 1987, when the government announced plans to demolish it. After an arduous eviction process, demolition began in March 1993 and was completed in April 1994. Kowloon Walled City Park opened on the site in December 1995. But some artefacts from the Walled City, including its Yamen building, remain. This was built in the early 1800s and served as a military headquarters. Remnants of its South Gate have also been preserved.

But while it has been demolished, memories of the Walled City - and its spirit - still live on in the hearts of many Hongkongers. It could be argued that today we have lost some of the sense of community and social solidarity that could once be seen there.

Growing up, Albert Ng Kam-po and his friends would go to the roof and fly kites that could almost scrape the bellies of airliners as they descended to Kai Tak Airport across the street.

"We didn't know it was so dangerous," says Ng, 45, a pastor at the English-speaking Island Evangelical Community Church in Quarry Bay.

"We'd just play ping-pong in the hallway. The kids would go up onto the roofs and leap from building to building, or we would drag discarded mattresses to the roof and jump on them. It was a happy time."

Ida Shum a 62-year-old former resident now living in Hung Hom, agreed that the some of the worst and poorest people in Hong Kong lived there. She said it was a haven for triad groups such as the 14K and Sun Yee On, who jealously controlled their territory. But she also said there was much more to the Walled City than that. She remembered how when it was raining, the street was nearly always flooded. Water would rise to people's knees with trash floating around, but the residents just walked through it in their bare feet. No problem, no matter how difficult, could be overcome. Shum described how her neighbour always helped her take care of her children and they cooked for each other. This allowed her to focus on her work and earn money to feed her family.

"We all had very good relationships in very bad conditions. Even now, many people stay in touch with each other even though some old friends are overseas," Shum said.

"People who lived there were always loyal to each other. In the Walled City, the sunshine always followed the rain."

Text and all photos are taken from www.scmp.com. 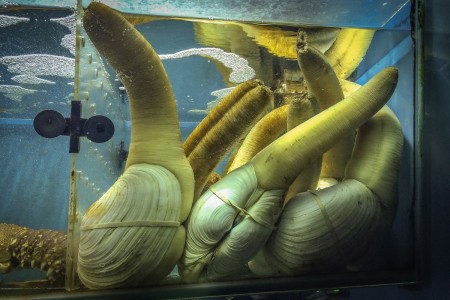 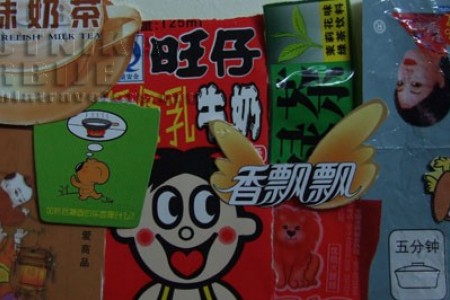 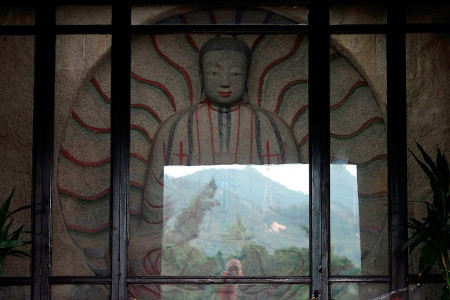