He's sitting behind a paper-strewn desk in a unlit office with faded pastel-green walls, surrounded on all sides by boxes and files which obscure the room's sparse furnishings. A woman in full-length furs is comfortably installed behind a flickering computer screen, clicking noisily away while talking on the 'phone.

The stocky, white-haired lecturer rises to greet us and smiles calmly, an unassuming dignity and openness about him. This diminuitive, friendly-faced Georgian in a woolly jumper carries a glint in his eyes which speaks of experience beyond the limits of communication.

Jumber Lezhava looks nothing like the bristling superhuman I'd assumed he'd be.

Roadside shouts of "Jumber!!! Jumber!!!" during my ride across Georgia in the winter of 2007 had made sense once I'd met Zoe, a young Dutch woman who'd ridden a three-speed bicycle across Europe and Turkey to Tbilisi. Zoe had heard about this mysterious Mr. Lezhava and we'd set out together to track him down. The trail had ended up outside a wooden door in a nondescript corridor of the Georgian Technical University's I.T. faculty.

"But," continues Jumber, "not permit me Libya, Saudi Arabia, Iraq, Afghanistan, North Korea, Brunei, Faroe Islands. Faroe islands, I not have money for go. From Norway I stop, not go Faroe."

Aside from the usual suspects, and a particularly inaccessible cluster of islands, we learn, he's cycled to every remaining nation.

"Two hundred thirty four," he says. Two hundred and thirty four nations and island states. And all of their capitals. Alone. Well into his fifties at the time of departure, he'd spent nine and a half years on this odyssey.

Who the hell was this guy?!?

I pick up a pamphlet from one of the desks, summarising his epic ride. "He traveled unaccompanied for 3573 days and covered 285,000 kilometres," reads the text. More than a quarter of a million kilometres. Or more than seven times round the Earth's circumference.

"Much times fighting, much times situation, accidents" — he knocks his fists together, imitating a head-on collision — "much water problem. Water. Shhhhhoooommmmm!!!" His shaky English doesn't faze him a bit; there's no fear of judgement, nor that we might not understand.

Growing animated, he continues, "and my bicycle and... cyclone! Cyclone. Australia. And throw me — baaahhh! And I flew — haha — and take my bicycle like this and I..." — he motions a digging action — "...in ground. For not go water, I save one bicycle! Haha!!!"

I would later discover that practically nobody outside Georgia would have heard of him. Yet he'd broken no fewer than eleven Guinness world records for cycling (and push-ups), the certificates for which he proudly shows us, alongside a stack of stamp-filled passports and an official document giving him diplomatic status — in effect, the ability to travel pretty much anywhere on his otherwise very restricted Georgian passport.

At a loss for what to think, I have already run out of questions for this man. And so he continues, telling the stories of his nine-and-a-half years of travel on six continents, of the time he'd cycled a hundred miles out from an Argentinian research station in Antarctica, only to be turned back by the security officials at the British post (well done, lads); of hacking through the Amazon rainforest between Brazil and French Guyana with his bike on his back; of being shot at chased by Kalashnikov-wielding guerillas in Swaziland; of fending off doctors who wanted to amputate his gangrenous legs.

"Minus twenty-nine, thirty been, and two weeks whole time day and night I been on road. No sleep in the house, and all froze," he says of wintertime riding in Scandinavia. He'd slept exclusively outside for a fortnight. "Only on the road! And really cold! And this all froze... my legs ... and in Stockholm want cutting for gangrene."

He still has his legs. The man is clearly indomitable. He'd subsisted, he said, on bread and raw garlic. And of course, as a bicycle traveller, he'd been taken in and looked after by endless legions of strangers wherever he went. It isn't all hard-man heroics and bullet-dodging, though these are clearly the easiest and most interesting stories to tell.

I never manage to find out where Jumber's motivation stems from. But his eyes whisper of some unforgotten bump in the road. Since he seems stupendously fit and well for a sixty-nine-year-old, I wonder at who or what it was that he might have lost, which might be pushing him to explore the limits of what he can put himself through while still hanging on to life.

Jumber's next plan, he tells us, is a casual little jaunt from Georgia to Beijing in time for the Olympics — having cycled to Athens for the previous Games, it seems the next natural step. And there is mention of a third visit to Greenland, this time in winter. But it's his Antarctic plans that are the most audacious. I'm torn between reflexive disbelief, and the knowledge that — after what I've already heard of his exploits — there is no doubt of his resolve. None whatsoever.

"Cycling, yes. Special cycle, after I show... we making specially."

He is planning to pedal a custom-built recumbent quad-bike called "The Penguin", already designed and under construction, to the magnetic, geographic and temperate South Poles. He will set out alone from the British research station that previously turned him away, and he quite expects that he won't return. This open pact with death hints again that one who would grieve his loss might already have passed on. Portraits and drawings of a woman, dark hair and eyes punctuating pale skin in a classic Georgian porcelain delicacy, give further clues.

By this point in our informal meeting, I can think of no more questions for this man, silenced by awe. He bumbles around the office, reams of photographs and journals and video-tapes and written-yet-unpublished book manuscripts putting paid to any suspicion that he might have made the whole thing up for a laugh. A local TV crew turn up to interview him about his Antarctic plans. 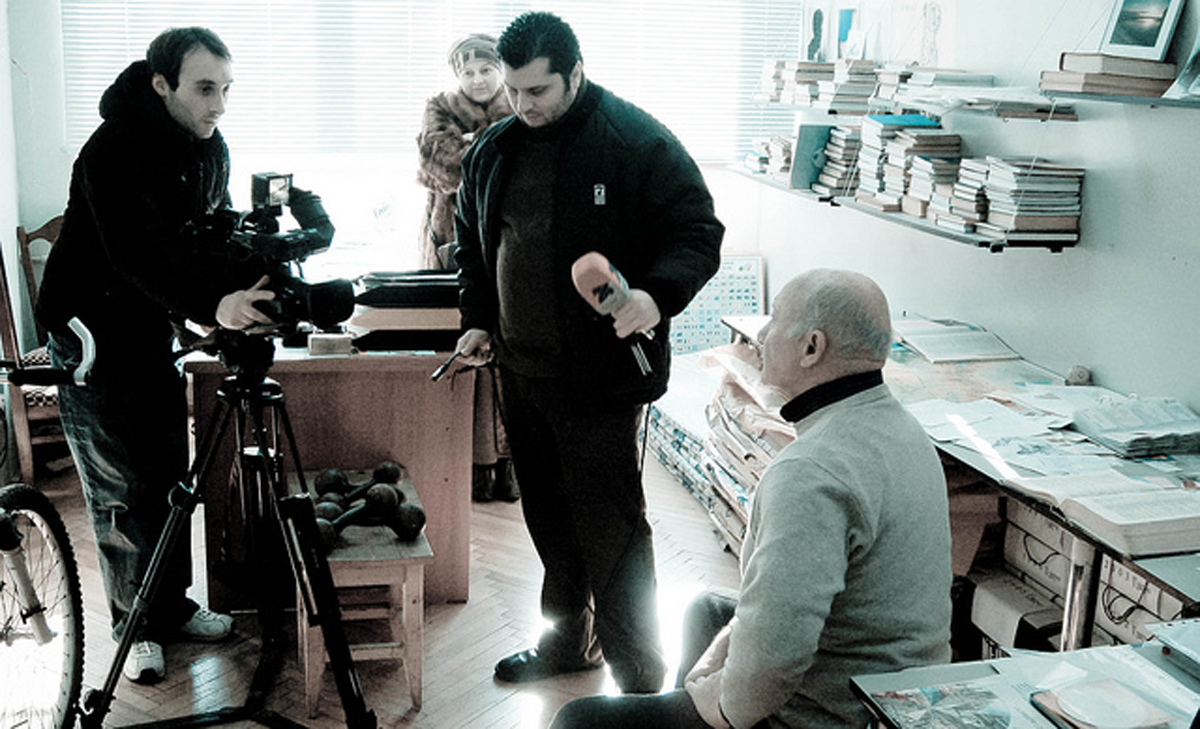 But it had never been about worldwide fame or recognition. There isn't an ounce of pride or boastfulness or vanity to his demeanour, none of the showboating that all-too-often accompanies attempts at the extreme and adventurous. All had been carried out in pursuit of an insatiable inner craving, a deeply instilled curiosity-turned-obsession with the frontiers of his own endurance and capability. He'd done it for himself, and it didn't matter a jot whether or not anyone heard about it.

And maybe that's why the world beyond Georgia still remains unaware of the enigma that is Jumber Lezhava.

Welcome to The Travel Club’s Travel House in Tbilisi. Please read these basic house rules and notify us by filling out the form at the bottom of the...