Being a woman, many will agree, is in a technical sense more demanding than being a man – we are more sensitive and physically weaker than men are, and our hygienic standards are defined a bit differently than in the case of the stronger sex. However, that doesn't keep us from doing sports, going out of the house in the evening or taking walks when we want to. That's why, when a female friend or neighbour tells you that travelling alone is a nice „but dangerous idea, especially for women", there is no reason for you to lose the idea and go watch TV  instead of undertaking such a trip.

Being a female independent traveller is the same as being a woman generally in life – use common sense. You can do everything that men do, but with two doses of extra precaution.

The first thing to bear in mind when going on an independent trip is how to pack. Don't take a suitcase you can't even lift, and then use your big eyes on the nearest man to help you with it. Pack a small amount of clothes in a backpack and bring a little bag of detergent. Be aware that going on an independent trip doesn't mean going on the catwalk. However, it is very important to have enough clothes for different weather conditions. You don't need different wardrobe combinations for uploading pictures on social media.

You need to take care that your clothes are in accordance with the local customs. That doesn't mean that you need to put on a burqa upon entering an Islamic country, but longer sleeves and shirts without cleavage leave an impression of respect towards their tradition, and shows that you don't want any male attention which is more than friendly. Yes, we know women should be allowed to dress as they want and that female clothes are not an excuse for intrusive male behaviour, but these are advices for safe and comfortable travelling, and not a sociological and philosophical debate on the rights of women.

When packing, you need to take care about the hygiene as well as about your wardrobe. Again, consider the culture of the lands you'll be travelling to and the length of your travel. You won't be able to easily find pads and tampons in some countries, so it is better to bring them from home. Except for daily pads, you can also buy disposable, which will seem more valuable than gold to you when your monthly cycle starts somewhere in the Saharan desert and the nearest restroom is some 354km ahead.

Also, always bring 3 tampons and 3 wet-wipes in single packs for you-know-which-part-of-the-body. Carrying extra three grams doesn't make a big difference, but can help a lot, if the need be. There is an alternative for longer trips – silicone cups. They can last for years, are washable and don't contain any chemicals. You can get them in pharmacies. In Croatia, they are sold in bio&bio stores and cost around 30 euros. (Please, contact us with information about other sellers and their prices) If you are on the pill, make sure you have enough for the whole journey.

Slowly, we are approaching the most important topic, which is how to behave on a trip like this. We assure you, you don't need any supernatural talents to keep safe – common sense and rational decision-making are enough. Dangerous situations on trips are similar to the ones you could see at home, so you will be able to use tested techniques for avoiding them.

Try to be as discreet as possible in confronting unwanted comments and provocations instead of retaliating. A big number of uncomfortable situations could be avoided before they really get serious by not showing any interest, by not responding or starting any discussions, by just ignoring some things or just leaving the place where someone sees you as a target. Some girls carry a deodorant with alcohol, which is, unlike self-defence sprays, legal in all countries. That depends on you and on what gives you the feeling of safety. 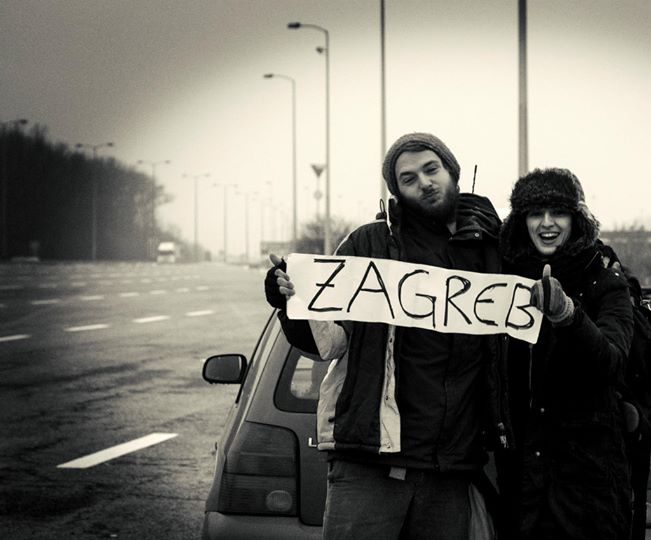 Although here at The Travel Club we tend to have strong positive feelings about hitchhiking, and we know many females who do it alone, we recommend the winning boy-girl combination: boys will get a ride easier because they are accompanied by a girl and girls will feel safer in the presence of a boy. If you find yourselves in a tricky situation, you can always improvise a fake wedding ring from a can of Coke and say you two are married. That should be enough in most cases to immediately stop inappropriate offers from others.

What if you can't find a travel companion but still don't want to stay at home and you decide to go hitchhiking on your own? As we previously said, both men and women face the same dangers, but we recommend women to double their measures of precaution. If you don't have any hitchhiking experience, we recommend all beginners (regardless of their sex) that they first "feel the road" in a group and then decide to take it up on their own. It is very important to "feel the road", as some things just can't be explained in textual or illustrated guides.

When you go hitchhiking for the first time (you probably won't be able to fall asleep the night before due to excitement), it is important for you to feel ready and self-confident, but with eyes wide open. If you don't like the driver offering transportation, don't get into the car. Think of an excuse, even a lame excuse such as "Sorry, but I need to use the restroom immediately." or "My friend just texted me that I should wait for him to continue the trip." or "I planned to study during the trip, but I left my notes at home, I need to go back and get them." It doesn't matter if they will believe you and how stupid your excuse sounds, it is important that you don't get into a car with a person who doesn't have "a good vibe."

If you got into a car with a person who seemed to be OK at the beginning, but you start doubting whether it was a good decision, here's a couple of tricks:

Our editor Nikolina said that she encountered uncomfortable situations three times in so far four years of hitchhiking experience. Once the driver only had bad vibe and she and her friend used the above-mentioned tactics of evoking compassion and called a friend on his cell phone, so everything went totally fine. One truck driver offered her sex, but she refused it, whereupon the driver apologized and said he just wanted to ask.

Don't allow the fact that you're a woman to be the reason why you spend your holidays watching passers-by from a café in the neighbourhood. The idea of the world being a dangerous place where maniacs, murderers and rapists lurk from around the corner, waiting for the chance to turn you into a headline at the black chronicle is as big of a nonsense as the idea of the world being a fairy-tale where everybody has good intentions and acts friendly.

The only way to figure that out is to go out and see for yourselves, but with a well-thought plan and acting responsibly. We wish you a safe trip and successful exploring.