A short travel story about a day trip to the deserted town of Agdam in the Nagorno-Karabakh republic. A quick stroll around town, a visit to the Agdam mosque and an encounter with a soldier.

While traveling around Caucasus I was led by a single desire: to explore Nagorno-Karabakh. If someone had asked me why, I wouldn't have had an answer. Until a couple of years ago I didn't even know what it is and where it is located, and then, by a sheer coincidence, I met a guy named Vahe, from Nagorno-Karabah, on an Internet forum. He was extremely proud of his country, as if he said "Great Britain". Since then the idea started brewing and last year, sometime in August, I went to that country... or whatever it should be called. 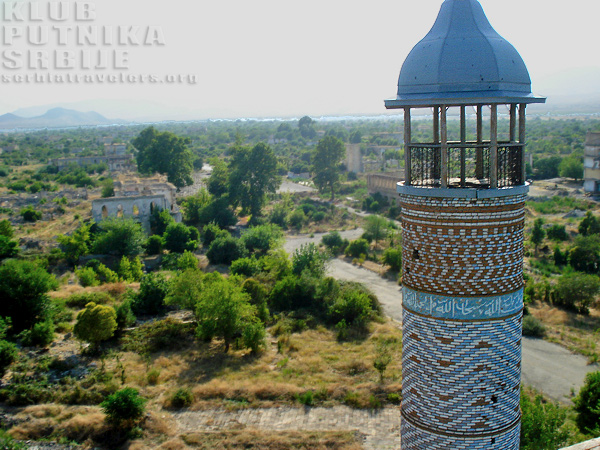 After an exhausting eight-hour trip in a marshrutka from Yerevan, we arrived to Stepanakert, the capital of Nagorno-Karabakh. The first impression... I can hardly remember exactly what it was. Either "God, where have I come" or "Wow, Telenor has a roaming contract with Nagorno-Karabakh". Anyway, I was traveling with an American and a Finn, so I was the only one who spoke Russian, and all the communication had to go through me (you will later find out why this is important).

The Armenians from Karabakh were happy to show us Sushi, an important town in the Nagorno-Karabakh war, as well as the Gandzasar Monastery. While we were sitting in a hostel in Tbilisi, someone mentioned Agdam. I opened my Bible (also known as the Lonely Planet guide) and started reading. A town with the population of 100.000, mostly Azerbaijanis, which was completely destroyed by Armenians in the war. Now it is just a bunch of ruins, and a mosque.

Of course, it is forbidden to travel to Agdam. In the permit issued by the Ministry of Foreign Affairs (the same institution that put a visa into my passport) there's a list of the towns you are allowed to visit, and that's it; you mustn't go any further. It is considered unsafe. How to go?

We walked around Stepanakert, asking taxi drivers if they would give us a ride to Agdam. Everyone told us the same thing: "It says in your permit that it is forbidden. You can't go. You can travel to Askeran, but not to Agdam". Askeran is ruins of a small town on the road to Agdam. However, we didn't give up. 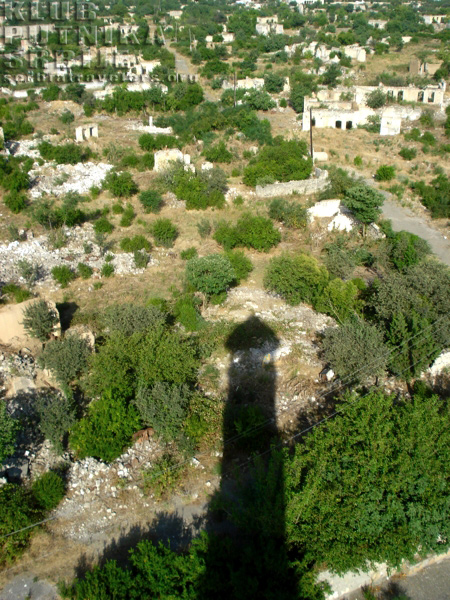 We asked a guy who was obviously not a taxi driver, but seemed rather interested as to where we were going. He approached us and said: "Agdam, mozhno". When I asked "Skolyko?", he replied "5.000 drams", which is not much when divided by three. So we accepted.

I have to admit that such adventures are not my cup of tea. As we were getting farther from Stepanakert and closer to Agdam, I started thinking that it is very possible that they arrest us, and I can't really hope to get any help from the Serbian embassy in Moscow. I had a lump in my throat. The man asked where in Agdam we wanted him to stop and wait for us. The mosque, of course.

The first thing we saw upon entering Agdam was the demolished Muslim cemetery in the outskirts. After that, the ruins start. On our way to the mosque we drove past a building with some fragments of Soviet-era mosaics. That was almost the only colour we saw there.
We were standing in front of what once used to be a mosque, a place of prayer. Today, people let cattle roam inside. The door of a minaret was open. "Lets climb", said Peter, the American, "the view must be great". Why not, since we're there already. They were looking around and taking pictures, and I just gave it a quick glance and already wanted to go down. I saw the army stationed nearby (and, of course, they saw us too) so I started descending the minaret. When I was down, I saw a shadow. I was petrified, but I tried not to show it.

"Hello guys. What are you doing here? You know it is forbidden." As I said in the beginning, because of the Russian language everything had to go through me. "Well", I said, "we have been told that this is a remarkable piece of architecture, an exquisite mosque..."
"Where are you from? What is your religion?"
"Serbia. I am Orthodox (not much of a believer though). The others are from the USA and Finland."
"Serbia, huh? You're good with Russians?"
"Yes. Yes, of course. I just wanted to see this because we also had problems with Muslims. They want to take a part of our country" (You always have to count on the lowest human urges. Frankly, I don't give a damn about Kosovo...)
The guy took pity on me. He said: "Americans are bad people, they poke their noses everywhere." Of course, I agreed, at the same time smiling to Peter, who understood that it was something bad about him."

As the old saying goes, money makes the world go round. I gave him five US dollars (luckily I had a banknote), and everything ended well. The soldier escorted us to the car (when the driver saw him his cigarette fell out of his hand, and you could see in his eyes that he was thinking "I'm going to prison"). We started driving toward Stepanakert. "Why did you bring the soldier?", asked the driver. "No worries, he's cool. We gave him something."

The next morning we talked to the hostel owner. "What have you seen?", he asked us. We started listing the places: here, here and there. And he just said: "And Agdam as well". Yes, Agdam as well.