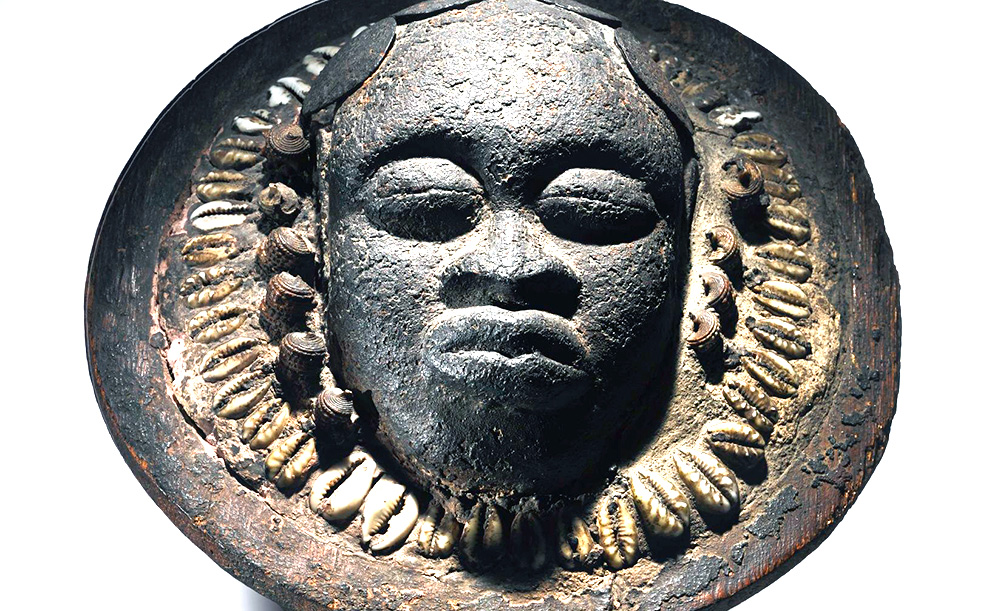 a divination mask from dahomey

Geoffrey Gorer (1905-1985) was an English anthropologist and writer. He visited West Africa in 1934, in order to study traditional dances of the region. His journey took him from Dakar through Senegal, Guinea, the Ivory Coast, the Gold Coast, Dahomey and Nigeria. This short travel story relates his experiences with strange rituals in Dahomey, today's Benin.

In an area which was certainly less than a hundred square feet there were more than a dozen women. They were all dressed alike with a cap of purple net from which hung long strnigs threaded with cowries falling to the breast, so thick that they completely hid the face. Across the otherwise naked torso were slings of cowries and purple beads; they had ordinary skirts and anklets of cowries. They were all in very deep trance and completely motionless; all the actions of everyday life, feeding, washing and so on, had to be done for them. They were no longer themselves; they were filled with the power of the fetish.

They could no longers speak; only by a certain ritual could the priest make them talk, and then it was no longer the woman but the fetish itself talking through its agent in its own language. In the present instance the women were to be in this state for three weeks, during which, except for the ceremonies, they could not go out of the hut or see the light. The wonderworkers are in this state permanently; if a man is completely filled with the fetish he performs no ordinary actions and never sees the light, nor does he eat any solid food. These wonderworkers are few and live in the most deserted places; their powers can be controled because they can work only through the agency of a normally conscious priest.

To call these entranced women out of the hut an elaborate ceremonial is necessary. They can move only to the sound of a special tomtom; when this starts playing the chief fetish priest kneels by the entrance and shakes a rattle while he invokes the fetish with prayers; the other fetishers present prostrate themselves and repeat the prayers, rubbing their hands together. After some time the tomtoms become louder and the fetishers shriek; one of the women has shown her mask at the door. A cockerel is immediately fetched; its legs and wings are broken and its tongue pulled out; its beak is stuffed wich special leaves and it is held by its legs; a drop of the blood is let fall on each of the woman's big toes; she comes out and with head downcast starts dancing feverishly, swinging her shoulders with a force which would tire an ordinary person in a few minutes. After the first several more are called out with the same ceremonial; not all that are in the hut, for that can only be left completely empty at the greatest ceremonies. The women dance in a vague circle, but like blind people; they have to be continually guided to prevent them knocking themselves against the buildings. Before they can return to the fetish hut they have to be purified; they are led on to a special mat where their hands and feet are laved in holy water, after which another chicken is mutilated in the same cruel fashion and ad rop of blood is allowed to fall from its beak on their thumbs and big toes. They are led back to the hut with prayers and rattles; they enter it backwards, creeping on all fours. This is the essential basis of fetish worship; the body is used as a vessel to be filled with the divine force, no less holy because the owner of the body is unaware of what occurs.

From the book "Africa Dances" by Geofrey Gorer, published in London in 1935. 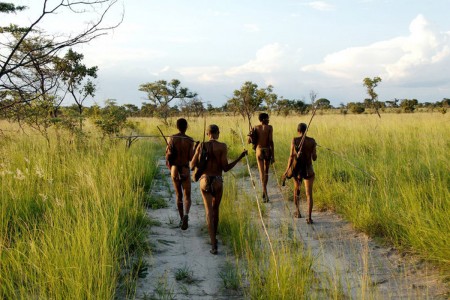 Some 22,000 years ago, they were the largest group of humans on earth: the Khoisan, a tribe of hunter-gatherers in southern Africa. Today, only...